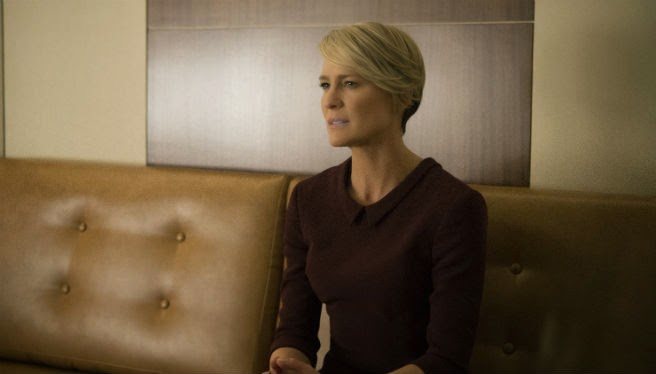 COMMENTS: Now THIS is the House of Cards I love - deep political tactical manoeuvring with the focus very firmly on the relationship between Frank and Claire Underwood.  The twin challenges they face are her UN nomination hearing and his Presidential nomination and we see them set pieces in place to achieve what they want.  The highlight of this episode was, for me, Frank's resignation speech.  It is deeply radical and even more blunt than Thatcher would've attempted at the height of her power.  It's in this speech that this remake comes closest to the radicalism of the British original.  Frank condemns entitlement and calls time on the bloated welfare state. It's superbly audacious rhetoric and a superbly audacious plan!  I wonder how the American viewing public will take it!

This series continues to be one of the best in terms of its visual style.  The most powerful image, arguably of the series to date, is of a toned athletic Claire towering over a vulnerable and quaking Francis and literally fucking him back to life.  The musical cue is particularly brilliant with a high register female operatic vocal signalling Claire's almost Valkyrian power and manipulation.  There's nothing sexy about that act - she sees it as an act of loyalty and necessity to keep their political brand on the road.  Later in the episode to emotional power tables are turned.  Claire pushes Francis for a re-nomination but you can tell she's absolutely anxious about whether she has pushed him too far. It's a marvellous piece of nuanced acting by Robin Wright.  How sad then that the final scene of this episode has such a crass metaphor of the two of them as eggs frying in a pan.

PLOT SUMMARY:  The First Lady (Robin Wright) stumbles at her Senate hearing for the position of the USA's representative to the United Nation.  She then mans the phones drumming up support but the confirmation vote goes against her.   Francis offers to give her another job but she wants the UN job and asks Francis to renominate her. Once again she says she can't wait just in case Francis fails.  He agrees but she wonders if she's pushed him too far and throws up in anxiety.

FU is told his Party does not want him to run for the Presidency and that an American citizen was killed in the drone strike he approved.  He then mans the phones drumming up the money to fund his campaign.  House Majority Whip Jackie Sharp offers her support in exchange for the Vice Presidency.  However she is leaking the party dissent to a journalist who then interrogates Frank's Press Secretary Seth Grayson. Seth stalls.  Frank calls the bluff of his party - claiming he's going to resign in exchange for committing his time to governing and putting his America Works Bill into action.    Moreover, he is now going to show the public the truth about the drone strike.

Doug Stamper is about to drink but doesn't because Seth has invited himself over.  The conversation is vague. Doug continues to drink.
Posted by Bina007 at 11:42