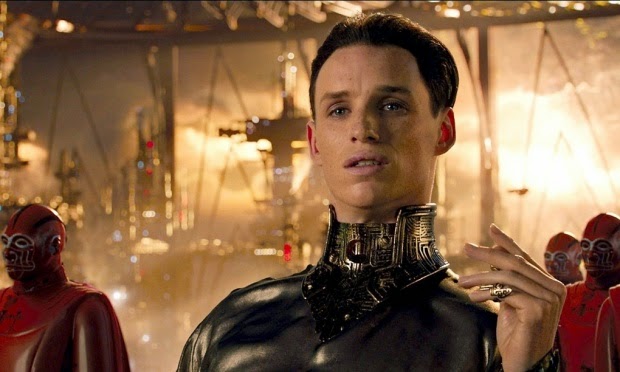 You can listen to  a podcast review of the film below or subscribe to Bina007 Movie Reviews in iTunes:

I can't work out whether JUPITER ASCENDING is a cunning satire on early twenty-first century capitalism and Hollywood's obsession with youth or just a steaming mess.

The Wachowski Siblings have created a world in which in human beings are just a commodity, harvested by oligarchs to create a serum for eternal youth.  The market-leaders in this harvesting business are three siblings of the Abrasax family.  The elder is Balem played by Eddie Redmayne in a performance so camp it goes beyond parody and into plain bad.  His rivals are his sister Kalique (Tuppence Middleton) and playboy brother Titus (Douglas Booth).  Humans are playthings for these future gods, until they discover that Jupiter Jones (Mila Kunis), an earthling cleaning lady, has the exact same DNA as their murdered mother.  Clearly all three siblings now have an incentive to find Jupiter, register her as their mother reincarnated, get her to claim title to the corporation they inherited, and run the world through her.  I say clearly because none of the above is clear or makes any sense.  And that's before I get to the space police staffed with cross-bred human-animal combos with angelic wings (Channing Tatum and Sean Bean).


The thing is, you can sell all of this stuff if your movie is credible - if the emotional engagement underpinning the movie sounds and feels real. But in JUPITER ASCENDING the dialogue is plain cringe-worthy, the attempts at humour pathetic, and the sci-fi world ill-thought out and ill-fitting. Why do we go from slick sci-fi alien world to Baroque hobbit-esque castles to Beetlejuice, Steam-punk bureaucrats straight out of a Terry Gilliam movie?  I don't care if you actually got Terry Gilliam to do a brilliant cameo - the tonal shift was just jarring and off.   There are just too many ideas and not enough that are properly worked out.  The performances are too big (Redmayne) or too flat (Mila Kunis.)  You just get to a point where you don't care, and seeing one more baroque interior holds no wonder. In fact, I defy you to sit through this film without wanting to walk out.

Worst still, this film has a retrograde sexual politics that I thought we'd overcome with movies like SHREK and FROZEN, let alone ALIEN.  Why does the hot room-mate have to flounce about in her underwear in the opening scene of the movie? Why does Jupiter always have to be rescued by bulky blokes?  Why is Jupiter always an alluring pawn to be used, saved or exploited?