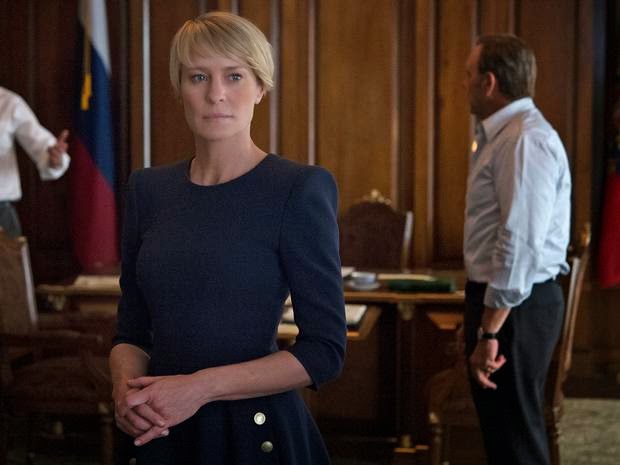 COMMENTS:  Let's talk about the look of Claire Underwood - the killer skin-tight dresses, the long toned legs, the impeccable hair and make-up, sexy but classy, frosty even. And let's talk about one of the rare times we see her in a suit, in grey, enclosing herself in a room tastefully and classically furnished in dove grey prints, shutting double doors on her husband's campaigning.  Now let's talk about samurai-Claire - as always in times of stress she dons the all-black ninja work-out clothes - except this time instead of taking a run very deliberately outside of the White House - she's using a rowing machine with a kind of manic ecstatic look on her face. And then Claire in a virginal and quite feminine white dress, pacified, looking dead behind the eyes, agreeing to stand by his side as the election result is announced.   Later, Claire dressed in funereal black watching Frank's acceptance speech, being manhandled by him in the Oval Office.

All season one could read Claire's moods through her clothes in a way that no show has come close to matching other than Mad Men.  This is costume design and art direction working at a higher level -  giving layers of depth and nuance to a series that has moved from cruder, plot-driven political thriller into something altogether more fascinating, psychological and nuanced.

A final note - we see Doug turn back but then we cut to him digging.  Is this a deliberate ambiguity? Will it be exploited next season?

Doug Stamper finds Gavin Orsay in Caracas, and beats him up until he gives him Rachel Posner's location. Back in the USA,  Rachel buys a fake ID under the name Cassie Lockhart. But it's too late.  Doug buys an unregistered car and finds Rachel, abducts her.  He seems to procrastinate over killing her but it appears that he changes his mind and is seen filling a grave.

Claire backs away from a conversation with Frank about lying to each other and appears to be a willing campaigner.  But later she forces him to have rough sex with her and he can't. The following day, Frank campaigns alone but she agrees to meet him for the election result.  She calls in Tom Wates and asks him if he let her pass out on purpose and whether she said anything other than what was in the first chapter of the proposed book.  He tells her that she said she hated how much she and Frank needed each other.  Frank ultimately makes his acceptance speech without Claire.  He returns to the Oval Office to find her sitting in his seat.  She refuses her conversation about them lying to each other. She resents having to ask for Frank's help but he gives her the "brutal fucking truth - without me you are nothing. This office has only one chair and you knew that from the beginning."
Posted by Bina007 at 20:06