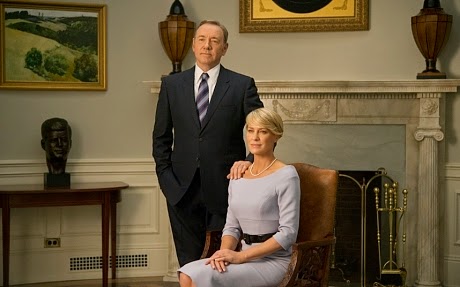 COMMENTS: As predicted, Claire's comment that she shouldn't have made FU President has pushed him over the edge. This episode therefore plays as a gentle romantic drama as Frank and Claire bicker and then make-up, reunited forever.  It's a gentle episode, lacking in real political bite, and I wish they'd have pushed this storyline further.  But I loved the almost elegaic feel and the delicacy of the monks' art and its echo to the earlier religious themes in the season.  It feels to me like a major theme this season is how far humans have the right to take the action of gods - the power to take life - and the concepts of mercy, forgiveness and reconciliation.   So this episode is wonderful - but it does feel tonally different to the rest of the season.

PLOT SUMMARY:  The President and his wife, newly brunette, renew their vows. One month earlier, in the wake of her stand against Russia, relations are frosty. Tibetan monks on a cultural exchange at the White House.  FU goes to his hometown with his biographer, Tom Yates, who has reached out to Telegraph reporter Kate Baldwin.  FU even confides in David about his marital difficulties, while Claire resents his presence. They even bicker in a cabinet meeting.  But after a visit to the Roosevelt memorial, in which husband and wife are separated by a wall, Frank reaches out to Claire.  She dies her hair her natural colour, as when they met, and they renew their vows.  As they do, the beautiful mosaic like painting the monks had created is wiped off the table.  In an attempt to win FU's trust, Yates reveals he didn't write most of his first book but took the credit for it.   Claire tells the Israeli ambassador that FU has given Claire the funding to buy off the African nations so that  they won't back Israel in blocking her motion.  The Israeli Ambassador mocks Claire - FU didn't stand by her in Russia - but Claire defends him fiercely.  That night, they sleep together.

Meanwhile, Gavin Orsay has located Rachel Posner for Doug Stamper who sleeps with his physical therapist on her last day in town.
Posted by Bina007 at 17:41