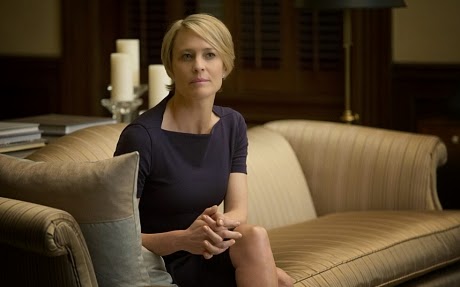 COMMENT: A rather blah episode that mechanically gets Frank to the point where he'll openly declare.  Very Tab A into Slot B.  The hurricane metaphor was especially tired and there was none of the lyricism or visual imagery that made earlier episodes great. Maybe the small role accorded to Robin Wright also has something to do with the lack of tension.  Moreover, the predictability of Yates and Kate sleeping together is just low-grade writing.

PLOT SUMMARY:  A massive hurricane is headed for the East Coast. Congress will grant him emergency funds but only if he doesn't raid FEMA again.  Doug Stamper tells Seth that Jackie Sharp and Heather Dunbar met to collude on suspending their campaigns during the storm.  By contrast, Francis urges Claire to push ahead with a dinner to celebrate her successful UN Resolution.  He is betting that the storm will pass and urges Jackie Sharp to remember her campaign is ultimately their campaign.  Ultimately, Frank caves, but not after arranging a new job for his cynical old friend who used to run the rub shack.  But then the hurricane turns & Frank desperately needs a way to undo the Bill.  As he cannot he decides to declare his candidacy for President. The election will be a referendum on AmWorks.

Meanwhile journalist Kate Baldwin continues to criticise Frank and demands to be a columnist rather than a reporter.  And biographer Tom Yates tells Frank that he hasn't actually mentioned AmWorks in his book.  Kate asks Yates to be a source for her article: he won't but they do sleep together.
Posted by Bina007 at 18:26