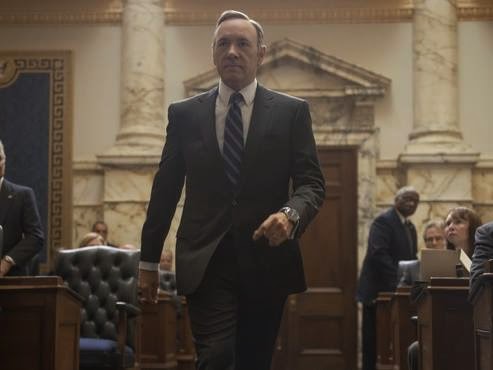 COMMENT:  The directorial touch of having the camera close up on Claire's face as she hears her husband and Petrov immediately spin the suicide of Corrigan is superb.  I keep detecting flickers of a separation between Claire and Frank and it's fascinating. And with the immediate apology to Petrov, surely FU has crossed the rubicon?  For her to tell him she should never have made him president is powerful stuff.  Superb.

PLOT SUMMARY: The Underwoods go to Moscow to release Corrigan but he refuses to read the conciliatory press statement. Claire attempts to emotionally blackmail him into leaving for the sake of his husband, but he wants to be a martyr.   He tells Claire he doesn't love his husband and posits that she doesn't either: they don't even sleep in the same bedroom.   While Frank negotiates to make a statement rather than Corrigan, he commits suicide in his cell while Claire is sleeping beside him.  As FU and Petrov immediately decide how to spin the death, Claire listens with a cool disgusted look on her face. Claire goes rogue on the podium and reveals that Corrigan died because he wouldn't make the statement. FU immediately makes an excuse for her in front of the press and apologises both to Petrov and the Russian people. On the flight back Tom Yates tells Claire she did the right thing.

Meanwhile, hacktivist Gavin Orsay ingratiates himself further with Rachel Posner 's friend and starts to narrow down his search of internet traffic. Doug Stamper flirts with his physical therapist.
Posted by Bina007 at 15:23