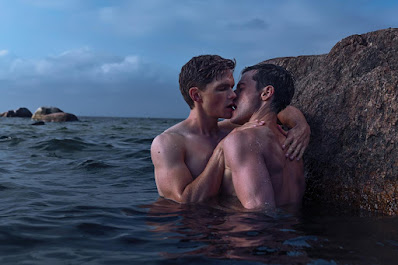 FIREBIRD is an earnest but essentially plodding romantic drama based on the true story of two gay men who are not able to pursue their love in the Soviet Union. The best I can say about it is that the production and costume designers did a superb job of re-creating the kitschy low-rent costumes and interior design of the 1970s.  But sadly, the film suffers from a leaden script, no real sense of menace, uneven accents, and very little directorial flair. Let's explore each in turn.
The film is based on the memoirs of a Soviet actor who fell in love with a fighter pilot while conscripted in Estonia. Those memoirs have been adapted by director Peeter Rebane and actor-screenwriter Tom Prior (KINGSMAN). The story is intensely straightforward. The young conscript - Sergey - and the pilot - Roman - have a brief fling that ends when the career pilot is scared by an officer's suspicions. Sergey goes off to theatre school, and is reunited with the now married pilot and they have an affair. But confronted by the reality of his married life,  Sergey leaves Roman who then goes off to Afghanistan.
We don't feel the force of the Cold War or any real menace of Soviet domestic espionage. Yes there's a sinister looking old soldier who threatens to expose the  protagonists but they seem to write each other letters and make phone calls without worrying about being spied upon. I felt no sense of oppression. Sergey and Roman seem to be able to conduct an affair in Moscow with no-one shopping them. This is hardly the atmosphere of THE LIVES OF OTHERS.
Worse still, the dialogue is very Basil Exposition. "Shit - border guards are coming!" "Shit - the fuse is blown!" And when not obvious it's hackneyed. "What do you want?!" Person attempt to answer. "No - let me dramatically interrupt you!"
Maybe I might have given myself to the film more had I not spent its running time wondering why it had a mixed Russian-Ukrainian cast speaking authentically accented English and then English actors speaking with really bad and varying accents. This is a real shame because Tom Prior, as Sergey, gives a good performance but I just couldn't get passed the bad attempt at an accent - especially notable when playing opposite the Ukrainian actor Oleg Zagarodnii (Roman) and the Russian actress Diana Pozharskaya (Luisa).
Moreover, there's nothing particularly exciting about the way the film is shot. It's just full of static camera with very little movement or energy. Was that a deliberate stylistic choice to show how static and trapped these people were or just a lack of visual flair? The only shot I thought was genuinely good was one of Sergey trapped in a tiny depressing bedroom crying on New Years Eve while fireworks go off outside his window - it's a beautiful and concise depiction of a man trapped on the outside of life by convention and bigotry.
All of this makes me incredibly sad because the world needs diverse stories and films that foreground queer love stories in particular. That's even more true of stories set in the former Soviet Union given the recent resurgence in homophobic legislation and persecution.

FIREBIRD has a running time of 107 minutes and has not yet been rated. It opens the BFI Flare Festival tomorrow.