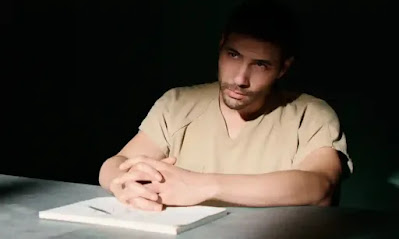 THE MAURITANIAN is the true story of a North African Muslim man called Mohamedou Ould Slahi who was detained, interrogated and tortured for 14 years in Guantanamo without ever actually being charged with anything. As such, his case serves as an exemplar of the horror story that acts as a sore on the American legal justice system. As the film so eloquently puts it, Guantanemo doesn't exist offshore so that the prisoners have no legal rights, but so that they cannot be legal witnesses to the crimes committed by their jailors. The film is also at pains to point out that his detention continued through both Republican and Democratic presidencies. Those lionising Obama and Biden would do well to ask why.
The film is directed by Kevin Macdonald - a film-maker whose career straddles both documentary and fiction, and who has tackled political subjects such as the life of Bob Marley and Idi Amin. He brings all of that skill and experience to bear in this film, a biopic that plays like a fairly straightforward courtroom drama but is interrupted by increasingly surreal flashbacks.  These are filmed by DP Alwin H Kuchler, who worked on Macdonald's Marley, in sepia-tinted square-framed, vignettes - like grainy super-16 memories from old cine-films. This works well for Slahi's childhood and experiences as a student in Germany and then fighting for the Mujahideen in Afghanistan.  Where they get surreal and truly impressive is when Macdonald and Kuchler are depicting the torture that Slahi underwent and how this distorted his psychological state as well as his body. Those scenes are a rightly tough watch but are also incredibly well put together.
The cinematographic shifts are just one part of this production that tries to clearly articulate the Kafka-esque nightmare that is being a detainee at Gitmo. I loved the production design that saw lawyers on both send descend into a hellish claustrophobic series of concrete lined airless room to look at banal boxes of largely redacted documents. Everything about this case speaks to obfuscation and corruption of the very concept of justice.
The first hour is a slow-build and might test some viewers' patience. Perhaps this is the correct way to depict the slow build of frustration at a case that took 14 years to complete. But the second hour is transfixing. Jodie Foster's righteous outrage as the real life defense attorney Nancy Hollander is iconic. And as ever, Tahar Rahim really impresses, moving across time periods and emotions - from youthful exuberance - to naive trust of the American legal system - or his wary cynicism when Hollander first turns up to help.  His final speech in his own defense moved me to tears. And his experience when the verdict comes through - sharply cut off in his celebration by Macdonald - is such a strong ending to this film.
Elsewhere Benedict Cumberbatch is good as the prosecuting military attorney Stuart Couch but his role is thankless.  He comes across as wilfully naive if he doesn't realise before this case that confessions have been extracted using torture. For me the far more interesting characters are the torturers - what are their motivations and justifications? Are they just sadists, carefully selected? Or do they also have a conscience?  I am particularly fascinated by the female interrogator who raped the prisoner. Sadly this film does not extend to examining their motivations, but I guess that's only to be expected since it's based on the memoirs of Slahi.

THE MAURITANIAN has a running time of 129 minutes and is rated R. It is currently available on streaming services in the USA and will become available in the UK on April 1st.