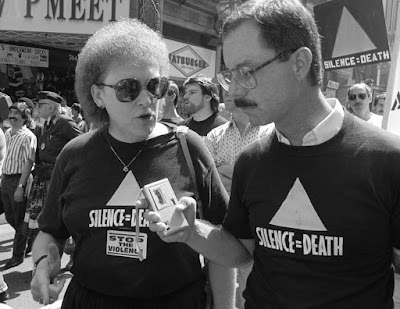 AIDS DIVA: THE LEGEND OF CONNIE NORMAN is an absolutely fascinating documentary that restores one of the heroines of ACT UP and trans rights to our consciousness - the remarkable, smart, compassionate, charismatic Connie Norman. My only criticism of this intimate, tightly edited and well organised documentary is that I wanted more. I wanted someone to give the director Dante Alencastre more money to allow him to expand it to a 90 minute run time and to show us how Connie became the woman she became. What was it like to grow up trans in Texas and how did she maintain her confidence and self-esteem?  How did she know to listen to that still quiet voice inside of yourself and to be true to herself?  I would also like to have  seen more of her early days in California and battle with drug addiction. Again, to see where strength came from to overcome.

As it is, the documentary picks up with Connie already perfectly formed: living as a trans woman, recovered from her addictions, diagnosed with HIV in the early 1980s, married to her wonderfully supportive husband. In her words "I lived it. I got it. I'm dealing with it." She throws her energies into leading ACT UP Los Angeles - an organisation that lobbied for the LGBT community to have equitable access to healthcare resources. She quickly became well known in the activist and public health communities and helped push for help specifically for the trans community. Along the away she became educated about gender and how it is treated by indigenous communities and came to believe that rather than being polar it is actually a spectrum. So, she was decades ahead of us.

What comes across from old video and TV footage is just how smart, sensitive and articulate Connie was. I could listen to her all day. Whether sensitively describing the spectrum of gender identities to students at UC Santa Barbara or angrily describing her frustration at the lack of movement in AIDS healthcare on TV - she is always captivating. Even at her most angry, she never loses her compassion. She always feels relatable and wise. Thank goodness this has been captured for posterity. After watching this film I searched the internet trying to find out more and to my shock, Connie doesn't even have a wikipedia entry! No offence to Larry Kramer and all the other famous heroes of activism but come on - let's see Connie take her place in the firmament. This film is - I hope - the first step in that mission to capture the authentic voices of that time - not just Connie but her fellow activists - so that we can all learn from their words and deeds, and continue that thread of progressive activism to the present day.

AIDS DIVA: THE LEGEND OF CONNIE NORMAN has a run time of 60 minutes and is not yet rated.