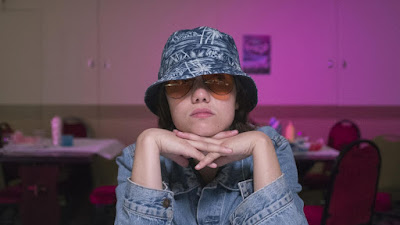 SWEETHEART is the absolutely adorable and heartwarming debut feature from writer-director Marley Morrison. It stars Nell Barlow as AJ - a newly out lesbian teenager who dresses like Liam Gallagher's little sister; is acting out because she's confused by her parents separation; and is chronically shy around pretty women. At the start of the film she comes off as a spoiled smart-arse but we soon realise that all that self-conscious woke angst hides a really smart and sensitive girl. In fact, all of the main characters in this film are basically kind and earnest and just dealing with a lot of shit.
Principle among them is AJ's mum Tina, who is trying to be supportive of her middle-daughter coming out, but is worried about her getting into trouble at school and feels unappreciated for keeping the family together.  Jo Hartley (THIS IS ENGLAND) is so credible and sympathetic in this role.  Tina is backed up by peacemaking elder sister Lucy (Sophia Di Martino - YESTERDAY) and her wonderfully lovely partner Steve (Samuel Anderson).  All of them feel free to call out AJ on the worst of her pretentious nonsense, but also ultimately just want her to be happy. You really feel the warmth and support coming through even if the mum and sister don't always have the right language to express how they feel.
The action of the film takes place over a week at a beautiful English seaside holiday park, with the family living together in a chalet. Much of the plot is driven by AJ's tentative relationship with the park's young lifeguard Isla, played by Ella Rae-Smith.  This is so relatable - whether or not you're gay: we all know what it's like the first time someone touches your hand and you get butterflies - or the first time you make out with someone you care about. And the way in which Morrison observes how teenagers are around each other is wonderfully authentic and funny.  We've all been at parties where some dickhead boy is chatting shit! In these scenes, we're rooting for AJ - we want her to put the boy in his place - our stomachs fill with butterflies when Isla makes her move.  We're absolutely invested in AJ's story and that speaks to Nell Barlow's unaffected deeply sympathetic performance.
Kudos also to DP Emily Almond Barr for capturing that clear crisp English seaside light and to the production designers for infusing the park with pastels and neons. I also loved Toydrum's score and use of indie 80s-synth infused music.

SWEETHEART has a running time of 94 minutes. It is not yet rated. It played Glasgow and BFI Flare 2021 and does not yet have a commercial release date.