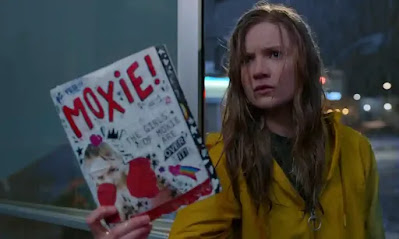 MOXIE marks the second film that Amy Poehler has directed (see the risible WINE COUNTRY) that lacks energy and humour. It just goes to show that just because you are a wonderful comedic actress you don't necessarily have the chops to helm a film.  But MOXIE is worse than WINE COUNTRY because as well as lying on the screen like a damp squib, it's actually pretty offensive.
The movie is meant to be an earnest and woke tale of a contemporary teenage girl who overcomes her shy nature to write an underground comic that slams the school's misogynistic culture and lead a student revolt. In doing so, the student (Hadley Robinson - zero charisma) is inspired by her mum's (Amy Poehler) vintage collection of punk music, clothes and fanzines. There's a scene early on in the film where Poehler's character gives the contemporary criticism of that wave of feminism - most notably that it wasn't intersectional. But then this film falls straight back into all the racist tropes.  The spiky, smart Lucy - the film's principal black/latinx character - exists basically to prompt a radical awakening in the film's white heroine.  The film's principal Asian character - the protagonists best friend - is the cliched second gen Asian oppressed by her demanding parents.  And at some point isn't it offensive to always - just always - depict the jocks (Patrick Schwarzenegger) as dumb, nasty bullies? Even the good guy in this film - played by a delightful Nico Hiraga (BOOKSMART) is too good to be true and has no nuance to his character. Once again he's just someone to hold the white girl to account.

MOXIE has a rating of PG-13 and has a running time of 111 minutes. It was released on March 3rd on Netflix.