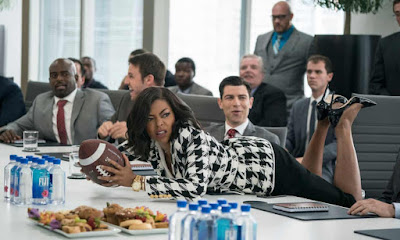 WHAT MEN WANT is exactly the kind of film you watch after a year in lockdown when you have no social life and nothing better to do. I knew the reviews were bad, but I had a genuine fondness for the 2000 original WHAT WOMEN WANT and saw Tracy Morgan on the cast list and thought, well, how bad can this be?

The answer is very, very bad indeed. This film is so humourless, joyless, lacking in originality or surprise, that it genuinely boggles the mind. Adam Shankman (BEDTIME STORIES) directs like a hack. Scenes slickly move forward, but nothing coheres, nothing moves, whether to laughter or tears. It's all just deeply blah.

Taraji P Henson is utterly wasted in the Mel Gibson role. She plays a tough as nails sports agent raised by her single dad (Richard Roundtree). She fears she's being blocked from promotion because she's a woman. But one of the more troubling aspects of this film is that while she IS being disinvited from the boys' poker games, she's actually being blocked not because she's a woman but because she's just not very nice, and certainly not a team player. So essentially this is a film about how its progonist is a dick, and the men are actually okay. Weird.

Also this may be one of the very few films in which Tracy Morgan - playing the dad of the young sports star the heroine has to sign to make promotion - is just annoying and unfunny.  What a crime against cinema! All of the scriptwriters -and there are many - need to go and sit in the corner and think very carefully about what they have done.

WHAT MEN WANT was released in 2019 but is now streaming on Netflix. This makes the marginal cost of watching it zero but that's still too much.  It is rated R and has a running time of 117 minutes.