BIGGIE: I GOT A STORY TO TELL 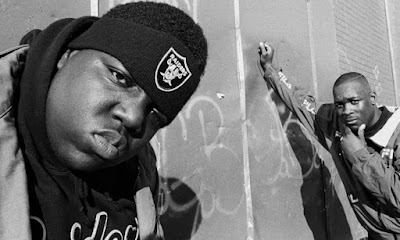 BIGGIE: I GOT A STORY TO TELL is NOT, I repeat NOT, a film about his murder and the west coast-east coast rap rivalry that proved so fatal. Rather, its director Emmett Malloy pitches the documentary as a film about Biggie's life and work. The problem is, if you studiously avoid his death, and why it happened, you basically have to exclude a lot of what made Biggie (and Diddy) problematic people.  You exclude Diddy's ties to the Cripps - you exclude some of the nastier taunting diss tracks against Tupac - and you exclude ties to outright crime and corrupt police forces on both sides of the country.

The result is that this documentary skates close to hagiography. Biggie is a ludicrously talented rapper, influenced by jazz improvisation. He is generous and loyal to his childhood friends and loves his moms. He loves his children.  To be sure, he's a drug dealer too. But he wants to leave that life and dedicate himself to music. Apparently.

Still, I didn't regret watching this film. I learned a lot about Biggie and in the best way possible - watching candid home videos and behind the scenes footage of his rise to fame. We also get wonderfully honest and charismatic talking heads - from Biggie's no-nonsense mother to Diddy to childhood friends. I felt that I came out of the film with a better understanding of what life was like in that era of Brooklyn, pre gentrification - a slice of sociological history - and a new appreciation for Biggie as a rapper. His early death was a tragedy. But let's be honest, his hands were not entirely clean in the matter and neither were Diddy's.

BIGGIE: I GOT A STORY TO TELL is rated R and has a running time of 97 minutes. It was released on Netflix on March 1st.