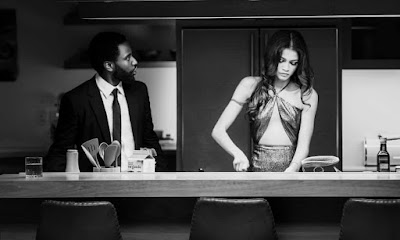 MALCOLM & MARIE is the first film I've seen made completely in and because of Covid lockdown. When production on HBO's Euphoria was shut down, its star, Zendaya, and director Sam Levinson, came up with this film as a small contained project that could be completed with a skeleton crew. The result is a two-hander that takes place in a single location over a single night and is shot in black and white. That gives the film a necessarily claustrophobic, artificial feel, and I think that as an audience we have to commit to go with that or just not bother watching at all. The result is a film that sustains a highly dramatic, raw, nasty argument between a couple for over an hour and a half, with only flashes of levity.  That comes mostly in the form of a brilliant mid-film darkly comedic long-form tirade from John David Washington's arthouse film director as he takes aim at film critics.

The performances are impressive if deliberately rather stagey, but this film really misses having another couple to play off, in the manner of WHO'S AFRAID OF VIRGINIA WOOLF. We need some air in the room, and a route into the argument, but I guess that wasn't deemed possible given Covid restrictions. Still I loved the look, style and feel of the film - infused with a jazz heavy score - and it really works as a showcase for both Zendaya and John David Washington's acting talent. As a film - I dunno. Given that it was being funded by Netflix I might've shortened the running time to an hour.

MALCOLM & MARIE is rated R and has a running time of 106 minutes.  The film was released on Feburary 5th on Netflix.