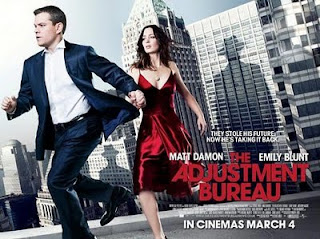 THE ADJUSTMENT BUREAU is a slick sci-fi thriller based on a story by Philip K Dick and adapted and directed by George Nolfi, the scrennwriter behind THE  BOURNE ULTIMATUM. Photographed by John Toll (THE THIN RED LINE, VANILLA SKY) to depict contemporary New York as adjusted to be slightly shiner and sharper than it really is, the movie starts Matt Damon and Emily Blunt as a politician and dancer, for whom The Adjustment Bureau has bigger plans than to "just" fall in love and be content.

I loved the look of the film, and I found the chemistry between Damon and Blunt convincing. I even found the idea of Damon as a young, charismatic politician credible.  But I hated pretty much everything else about the film.  Anthony Mackie's inert performance as the Adjuster with a heart was unconvincing, and the fact that these angels/aliens? wander round Manhattan in Mad Men style suits and hats just seemed anachronistic and laughably obvious. I also had a problem with the central premise that these Adjusters have allowed us to have free will on small things, like which colour tie to wear, but not on big things, like who to fall in love with. I mean, haven't we all been raised to believe in the Butterfly Effect - that everything matters? Surely, when it comes to free will versus determinism you can't be in a half-way house. This inconsistency and poor-logic extends to the ending, which, without spoiling it, is very unsatisfactory.

The other problem with the concept at the heart of the movie is that it reduces the stakes of the film.  We are meant to empathise with the Damon and Blunt characters - to root for true love - to want them to be allowed to be together.  But when we discover that they only want to be together due to a kind of psychic residue from an earlier version of The Plan, frankly I didn't care too much. All of a sudden the movie wasn't about true love being hindered, but mopping up after an old version of the plan.

THE ADJUSTMENT BUREAU is on release in Serbia, Bosnia, Croatia, Greece, Kazakhstan, Malaysia, Russia, Singapore, South Korea, Thailand, Bulgaria, Canada, Estonia, Ireland, Philippines, Poland, Spain, Turkey, UK and Denmark. It opens on March 11th in Denmark, Germany, Portugal, Slovenia, Finland, Iceland, Norway and Egypt. It opens later in March in Egypt, Hong Kong, Lithuania, Belgium, France, the Netherlands and Hungary. It opens in April in Mexico, Colombia and Israel. It opens in May in Brazil, Peru, Japan and Panama. It opens on June 16th in Argentina, Chile, Italy and Venezuela and on June 24th in Paraguay.
Posted by Bina007 at 21:27