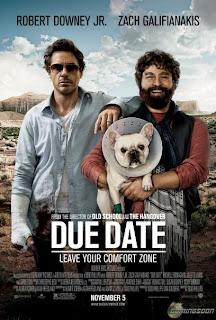 Todd Philips, writer-director of OLD SCHOOL, SCHOOL FOR SCOUNDRELS and the break-out hit THE HANGOVER, returns to our screens with what can only be described as a piss-poor; woefully under-written; shameless cash-in. The structure of the movie aims to rip off what was best in PLANES, TRAINS AND AUTOMOBILES. Robert Downey Junior plays an up-tight architect on his way home to see his wife deliver their first child. Zach Galifianakis plays the creepy fuck-up who manages to get the architect put on a no-fly list, sans wallet and cash, compelled to take a road-trip with the very man who messed up his travel-plans. What follows is a series of comedy set-ups that just don't work for two reasons. First, Downey Junior and Galifianakis have ZERO chemistry (and made me appreciate just how well Jude Law and Downey Junior worked together in SHERLOCK HOLMES by comparison). Second, Galifianakis is, like Danny McBride, the kind of comedy "talent" that works best in small doses. They always play creepy man-child characters - people who are meant to make us laugh with their social ineptitude. Five minutes to leaven an otherwise grown-up comedy is just fine to add a dash of zaniness. But these guys can't carry a feature - they topple it over. For further evidence, check out McBride in TROPIC THUNDER (perfect!) and FIST FOOT WAY (over-dose).

Other than the lack of chemistry and over-use of the irritatingly weird Galifianakis, the political satire (anti-terrorist airport security, cross-border immigration) falls flat, and the joke about a dead man's ashes kept in a coffee canister just reminds us how good the Coen Brothers are, and how much subtler their treatment of the same comic material was in LEBOWSKI.  And, dear lord, what on earth are Jamie Foxx and Juliette Lewis doing in this flick?  And will their ever be a comedy cameo to match the sheer surprise of finding Tyson in THE HANGOVER or Bill Murray in ZOMBIELAND?