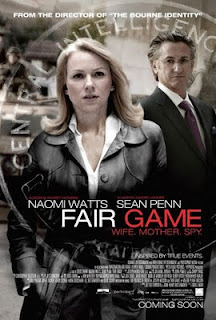 True story. Valerie Plame was a CIA operative, building networks to fight terror in the Middle East. Her husband, Joe Wilson, was a pugnacious ex-diplomat, and mediocre businessman.  When the Bush administration misquoted his research, and used it as casus belli for a "pre-emptive" war in Iraq, Wilson went public, explosively. In an act of miscalculated vengeance, Dick Cheney's aide, Scooter Libby, outed Wilson's wife as a CIA agent, exposing her network in the process.  Plame and Wilson had their reputations slandered in the press, suffered the stress of intrusive paparazzi, but ultimately history will see them as on the side of truth. Scooter Libby went to prison for obstructing justice but Bush soon commuted his sentence. And, of course, on the larger issue, the war in Iraq, it was too late to put the genie back in the bottle.

FAIR GAME is a new feature film based on this political and family drama, directed and shot by Doug Liman (MR AND MRS SMITH, THE BOURNE IDENTITY) and written by John-Henry and Jez Butterworth (THE LAST LEGION).  The movie drips in earnest good intentions. It wants us to be utterly repulsed by the dinner-party ignorance in Washington; by the brazen exploitation of Plame by the Bush administration; and the manipulation of intelligence in the run-up to the Iraqi war. It wants us to share in Joe Wilson's outrage and see his journey as one of vindication - from puffed-up has-been to inspirational public speaker. It wants us to admire Valerie Plame's loyalty, and sympathise with her disillusionment.

I think the problem with the film is that for those of use who share its political stance, none of this is new, and for those who don't - well, they are hardly going to pay to watch it. I was shocked at the time, but too much time has passed - too much nefarious wrangling has been exposed - for the shock factor to still exist. And as for the mechanics of cooking up a war, there is no better exposition than Armando Iannucci's IN THE LOOP.  And, suffice it to say, IN THE LOOP managed to be unbelievably entertaining, while at the same time expository. In contrast, FAIR GAME where it's mission very heavily indeed.  All that is not to say that the film isn't handsomely acted and technically well-made. It just fails to spark up.

FAIR GAME played Cannes 2010 where it lost to OF GODS AND MEN for the Palme D'Or.  FAIR GAME was released in 2010 in Italy, Norway, Belgium, France, Canada, Finland, Spain, Sweden, the USA, Bulgaria, Greece, Israel, the Netherlands, Thailand, Australia, Germany, Hong Kong, Switzerland, Austria, Taiwan, Portugal, Denmark, Kuwait, Lebanon, Malaysia and the UAE. It was released earlier in 2011 in Iceland, India, Egypt, Croatia, Singapore, New Zealand, Estonia, Indonesia, Ireland and Latvia. It is currently on release in Serbia, the UK and Brazil. It opens later in March in Brazil and Mexico. It opens in May in Argentina and Poland; in June in Chile, Kazakhstan, Russia and Uruguay; and it opens on July 14th in Ukraine.
Posted by Bina007 at 23:16