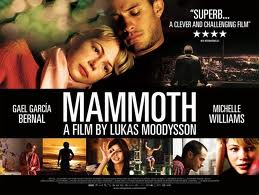 In New York a young professional couple outsource childcare to a Philippino nanny.  Sure, the surgeon-mother might get angsty that her daughter has more of an emotional relationship with the nanny than with her, but there's no real solution. Meanwhile, dad is off doing business in Thailand. We believe he really loves mum. Truly. And he's a good guy. But even he can't resist casual sex. And all the while, we cut to scenes of the Philippino nanny's kids, longing for mum to come home, and shamefully neglected by people who are too busy to care.

A decade ago, Swedish writer-director, Lukas Moodysson created a movie called LILYA 4-EVER about a young girl lured into child prostitution.  It was a movie that forced us to confront an appalling social wrong but also went beyond politics by making us empathise with Lilya in an unforgettable sustained POV shot of her being serially raped.  At the time I was shocked out of complacency and full of admiration for a movie that could make an "issues film" so visceral and unforgettable.  Unfortunately, Moodysson's latest feature, MAMMOTH, is less pure, less shocking, less affecting than LILYA 4-EVER:  with its intertwining pan-national storyline feels more like the pretentious, ponderous BABEL.

MAMMOTH's unceasingly heavy-handed examination of the cross-national labour trade is superficial and alienating - and undermines what are actually naturalistic and believable performances from Gael García Bernal, Michelle Williams and Marife Necesito.  The tragic result is that, while I can intellectually buy into why I should be angered by the issues shown in the film, I was bored rather than engaged.

MAMMOTH played Berlin 2009 and opened that year in Sweden, Norway, Finland, the Netherlands and Belgium. It opened last year in Russia, Spain, Germany, Hungary and the UK. It opened earlier this year in Poland. It is available to rent and own.
Posted by Bina007 at 19:06