Random DVD Round-Up 1 - THE KIDS ARE ALL RIGHT 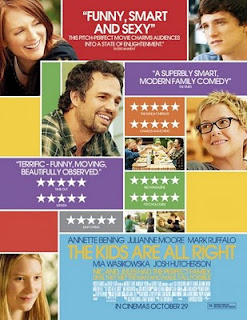 By the time I got round to watching THE KIDS ARE ALL RIGHT on iTunes, it had been well-reviewed by Ebert and The Guardian, and garnered a stack of award-season acclaim. And the film certainly had pedigree. Annette Bening and Julianne Moore are capable of both opening a movie AND portraying characters of emotional depth and nuance (see BEING JULIA and SAFE). Mark Ruffalo has impressed me ever since his turn as a bent cop in Jane Campion's IN THE CUT. And if we look at the younger members of the cast, Mia Wasikowska showed balls as well as ethereal beauty in Tim Burton's ALICE IN WONDERLAND, and Josh Hutcherson's performance in BRIDGE FROM TERABITHIA contributed to the emotional punch packed by the film. Most of all, I loved writer-director Lisa Cholodenko's spiky, emotionally skewering drama LAUREL CANYON, and was eager to see how she would bring that wry observational skill to the topic of a gay marriage brought under pressure by the appearance of the childrens' birth father. Put simply, I was ready to believe that the critical and commercial success of THE KIDS ARE ALL RIGHT was well deserved and looked forward to seeing it myself.

Imagine then, my disappointment, to discover a drama filled with characters drawn in two-dimensions, behaving in ways that seemed at odds with their temperament. I neither understood their actions nor cared about the consequences. A drama that should have been nuanced and sophisticated thus seemed as trite and crass as romantic-comedies dealing with more conventional relationships. I can, then, only, conclude, that the praise heaped upon this film reflects our collective relief that one can now make a movie about a gay marriage and treat it as a matter of fact rather than as a cause. But, then, again, doesn't the heaping on of accolades suggest that we aren't quite there yet?

At any rate, here's how the film works. Nic (Annette Bening) is married to Jules (Julianne Moore) and they have two kids, 18 year old Joni (Mia Wasikowska) and 15 year old Laser (Josh Hutcherson). The characters are drawn in broad strokes. Nic is the professionally successful control freak - Jules is the stay at home mum turned landscape gardener - a wannabe hippie with low self esteem. The kids are similarly broadly drawn - Joni is the swot and Laser is the jock. Basically, they are happy enough until the kids get in touch with their birth father, an immature but charming restaurateur called Paul (Mark Ruffalo). Nic is immediately suspicious of his destabilising influence, but Jules connects with his laissez-faire non-judgmental attitude.

Some of what follows is deeply predictable. Joni starts acting out in teen rebellion, spurred on by her motorcycle driving dad. Laser actually wisens up when his cool dad points out that his cool friend is actually an arsehole. But the real shock - the real crass and incredible (as in I literally don't believe it) - is that Jules has an affair with Paul. What kind of loving mother would really give up her family for a drifter like Paul?  (Unlike many message-boarders I don't have a problem with the fact that she has an affair with a man rather than a woman - I can buy that she's maybe bisexual rather than a lesbian.) Just because she felt her wife wasn't giving her enough support at home? I mean, maybe I could buy it in a movie that took her emotional state before the affair more seriously, but in this sunshine rom-com, I just didn't get it at all. As a result, when Nic reacts with understandable rage and distress, Annette Bening's performance seems to be coming from a different place entirely. It's worthy and heartfelt but entirely out of keeping with the rest of the film. Worst still, it makes Julianne Moore's performance as Jules during the repentance scene look utterly shallow by comparison.

What I was left with was a film that was trying to be very right-on and deserved credit for trying to treat gay marriage like any other marriage - worthy of cinematic exploration.  But I was also left with a film full of characters that acted in ways that I didn't buy into because they weren't sufficiently well-drawn. Poor Annette Bening tried to take the  material to a more profound level, but was, frankly, running on her own. This isn't, then, a bad film, but it isn't a great one either. Too uneven in tone - too uneven in its performances - too unfair to its male lead character - too easy on its female lead character - and just too thin altogether.

THE KIDS ARE ALL RIGHT played Sundance, Berlin, London and Toronto 2010 and opened last year in the US, Iceland, Israel, Australia, Denmark, Norway, Sweden, Finland, Argentina, France, Greece, Ireland, the UK, Brazil, Uruguay, Germany, Portugal, Austria, Chile and the Netherlands. It opened earlier this year in Belgium, Kazakhstan, Russia, Singapore, Poland, Spain and Hong Kong. It is currently on release in Estonia, Italy, Mexico and Turkey. It opens on April 7th in Hungary and on April 29th 2011. It is available to rent and own. THE KIDS ARE ALL RIGHT was nominated for BEst Film, Best Actress, Best Supporting Actor and Best Screenplay at the 2011 Oscars. It won the Berlin Teddy for Best Feature Film. It won the Golden Globe for Best Film and Actress - Musical or Comedy.
Posted by Bina007 at 20:23