YOU WILL MEET A TALL DARK STRANGER 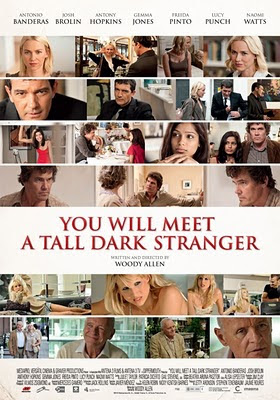 It has become fashionable for critics to patronise Woody Allen, a director who, apart from the odd freak hit such as VICKY, CHRISTINA, BARCELONA, hasn't produced a run of sustained hits since the late 1980s. He has been accused of cannibalising his back catalogue; producing dramas of diminishing quality; and for focusing his attention on an idea of the upper middle-class intellectual elite that is both anachronistic and irrelevant to modern life. Woody Allen has thus been condemned as a parody of himself. An old man who should do his reputation a favour and just retire. This view seems to be shared by the distributors. Outside of the Woody Allen-loving Parisians (and let's face it - they thought Jerry Lewis was a genius) most Woody Allen films receive a limited theatrical release or just go straight to video.

Still, for those of us who obsessively watched, loved and were provoked by his back catalogue, particularly the greats from the late 70s and 80s, a new Woody Allen film is hard to pass up. And when you get a movie based in your home town, starring actors of the calibre of Gemma Jones, Naomi Watts, Josh Brolin, Anthony Hopkins, Antonio Banderas and the criminally under-used Lucy Punch, expectations are higher than the critics would allow.

Precious little. The mood is perhaps even more cynical and nihilistic. The location different. But the material is undoubtedly rehashed not to mention the use of characters such as brassy hookers (DECONSTRUCTING HARRY, MIGHT APHRODITE) and men who are willing to murder and steal to get ahead (CRIMES AND MISDEMEANORS, MATCH POINT) let alone the idea of justice hanging on the throw of a dice or the fall of a coin (MATCH POINT). Humanity is portrayed as fickle, callow, self-serving and self-obsessed - life is a pathetic game of self-delusion - a desperate bid to outrun the inevitable. Woody Allen's characters may live in beautiful houses but they are rarely happy, and if they are, he mocks them for being idiots.

Having said all that, I still thoroughly enjoyed YOU WILL MEET A TALL DARK STRANGER for the simple pleasure of watching those familiar themes refracted through a new set of characters and a new set of actors. Because I didn't have to concentrate on surprises in the plot or thematic material - because I knew how the relationships would pan out from the start - I could simply luxuriate in the wonderful performances and three or four superb dramatic set-pieces that hold their own against any of Woody Allen's finer movies.

The first of those scenes is wonderful tragicomedy. Alfie (Anthony Hopkins) is an old man who doesn't want to admit that his life is nearing its end. He dumps his wife Helena (Gemma Jones) and bankrupts himself dating a money-grabbing hooker (Lucy Punch). Woody Allen skewers Alfie's vanity in a marvellous scene in which they sit in a sterile penthouse flat. She is draped on a fur coat she has just extorted for him, and he is waiting for his viagra to kick in, "Three more minutes..." Pathetic, beautifully observed, hilarious!

The second scene features Alfie's ex-wife Helena and their daughter Sally (Naomi Watts). Sally has married a failed author (Josh Brolin) and desperately needs her mother's money to start a new art gallery, but her mother has been wasting it on seeing a psychic who tells her she will meet a Tall Dark Stranger, and even worse, advises Helena not to give Sally money. The scene is wonderful because, as in life, you have two people who are related but who are in such different emotional and intellectual places that they simply cannot communicate. Helena comes across as smug, deluded and selfish in her manufactured happiness. Sally comes across as justifiably frustrated but also entitled and spoiled. It's beautifully acted and also tragic that this mother and daughter are unable to understand each other's needs.

The third scene features the wonderful Josh Brolin, schlubbed up as the failed writer Roy, so pissed off at his wife Sally's constant nagging for a baby that he has an affair with a pretty young woman (Freida Pinto) and so desperate for success that he steals an unpublished novel. There is a marvellous scene where he realises that he may well be busted and that look on his face - simply that - is worth the price of admission alone!

So, what can I say? YOU WILL MEET A TALL DARK STRANGER doesn't tell you anything you didn't know about Woody Allen's misanthropic world-view.  I don't need to see another brash hooker, and Freida Pinto certainly cannot hold her own among this cast-list. But, for all that, I enjoyed almost every minute, and certain scenes will stay with me as much as anything in Woody Allen's earlier work.

YOU WILL MEET A TALL DARK STRANGER played Cannes and Toronto 2010 and opened last year in Spain, the USA, Canada, France, Belgium, Israel, Greece, Finland, Sweden, Denmark, Brazil, Germany, Switzerland, Austria, Italy, the Netherlands, Estonia and Uruguay. It opened earlier this year in Mexico, Portugal, Romania, Argentina, Kazakhstan and Russia. It is currently on release in Poland and the UK.
Posted by Bina007 at 21:00