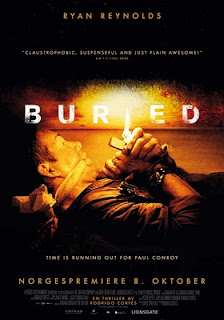 Ryan Reynolds plays Paul Conroy - a man buried in a coffin - running out air, and running out of cellphone battery life. He frantically tries to call his employers, his wife, the emergency services - he is frustrated, put on hold, given the run around.  It's the perfect horror movie set-up. Claustrophobia - a truly hard deadline - and the frustration that comes of dealing with an invisible enemy and supposed helpers unwilling to realise what's at stake. The concept is brought to screen with absolute perfection: director Rodrigo Cortes and DP Eduardo Gau (A SINGLE MAN) create a sense of true horror by never letting us leave the coffin. We are trapped with Paul, only seeing by the light of his Zippo and only hearing the voices on the other end of the cell. I don't suffer from claustrophobia but I was squirming in my seat by the end of the flick.

You can take BURIED as a high concept horror flick and leave it at that, but it's so much more. Arguably much of the best horror has a political or social agenda - all those Fifth Columnist body-snatchers, for example - and BURIED is firmly in that tradition. For Paul Conroy is a military contractor working in Iraq, paid by the US government. His captors are angry that he has come to their country and wrought war, but he comes off as naive and deluded - denying that he is a warmonger because he is not actually, technically a US soldier. As the movie develops, we see Paul disabused of that naivete, most brilliantly - not because his captors treat him badly but because his employer does! And, politics aside, who doesn't sympathise with being passed around a phone loop being forever put on hold by ignorant, underpaid, idiots at call centres?

BURIED is, then, a perfect film. It satisfies both as horror and as political satire. The crew deserve mad props for pulling off the technical feat and for having the good sense never to show a flashback or the face at the other end of the line. Ryan Reynolds deserves props for making his character believable and go on a genuine narrative journey despite the fact that he can barely move. But most of all, praise to the screenwriter Chris Sparling for combining fear, wit and intelligence in equal parts.

BURIED played Sundance and Toronto 2010 and went on global release last October. It opens in Hungary on April 21st.
Posted by Bina007 at 19:56