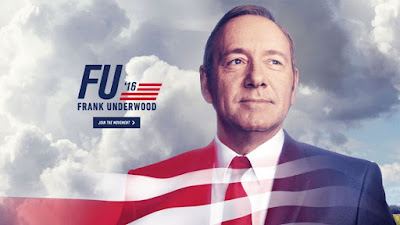 Thoughts:  An odd episode with a lot going on and maybe that's understandable for the second episode in the series.  It just didn't feel like it coalesced to me and the short running time suggests that perhaps it suffered from mis-editing? At any rate the big story here is how far Frank will go to stop Claire's candidacy and the final political coup de grace was joyous to watch. Elsewhere I find it hard to care about Remy Danton's retirement and who's stalking him.  But I do like the nuance of Claire's relationship with her mother and the idea that in order to get our from under Frank she will have to become more dependent on her mother.  Burstyn's brilliantly hysterical "I am THE MOTHER!" outburst takes this to the verge of melodrama but let's see how it's handled from now on....

Elizabeth meets with her friends, trashes Frank and asks them to financially back Heather Dunbar. She wants Frank to lose so that Claire can concentrate on her own career.  She further advises Claire to run under her maiden name and even which dress to wear for the State of the Union,

Meanwhile Doris Jones' daughter Celia lobbies Jackie Sharp to support the breast cancer clinic and offers to set up a $3m Superpac for her. It transpires that this is Claire's idea but Doris is annoyed. Moreover, Sharp supports Dunbar and so this is another source of Underwood wealth supporting Frank's opponent. Claire's back in the White House for the State of the Union address and Frank gives her his mother's earrings. Meanwhile Frank chairs a security briefing whereby a high profile Russian is trying to claim asylum. Frank is unsympathetic.

Claire and Frank meet to discuss the State of the Union and he is superficially supportive but immediately revises his speech.  At the address, Claire is wearing the ivory dress against her mother's advice.  But Frank screws her over but giving Doris Jones her cancer clinic and announcing Celia will stand for her seat, to Celia's apparent surprise.  Frank presumably cut a backroom deal with Doris. As Claire is driving out to the airport Frank makes another power play and orders her back to the White House. Alone, Frank tells Claire that she should run from a position of power - after he has defeated Dunbar. She asks for time to think in Texas.

Jackie Sharp is still with Remy Danton and is having her tattoo removed. She tells him about the Superpac offer and is suspicious that Leanne and Claire were in Doris' office. He offers to talk to Leanne and find out if the money is legit. They are both photographed leaving the hotel room they had sex in.   He goes to meet Leanne and says he's retired and pokes around for info. She stonewalls. At any rate, after the Address, the Superpac funding is not going to come through anyway.  Jackie asks Remy to come out to California with her but he refuses.

We then get a classic Frank Underwood tale from his childhood of a runaway boy who would always come to Frank's house but refuse to come in. Frank got Walter down by chopping down the tree with an axe.  Clearly this relates to Claire. "Hopefully she'll come out of her tree before I have to bring out my axe."     Finally Frank speaks to the Russian President Petrov. Frank offers him an IMF bailout and to return Igor Milken to Russia so long as he gets a trial and stops killing businessmen even if they are planning a coup. Petrov accuses the USA of backing the coup and Frank denies it.

On the plane to Texas, Claire tells Leann that they need to think bigger and this cycle.  She then asks her mother for her personal money to pay Leann and when she refuses threatens to sell the house out from under her.