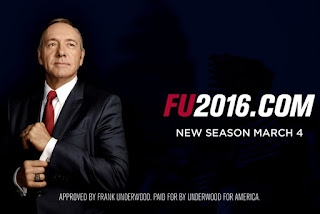 Thoughts: I am really upset that so much hard emotional and difficult and brilliant narrative work in season 3 that focussed on the breakdown of the Underwood marriage seems to have been undone by a deus ex machina plot-line so that we are now basically back to contra mundum Underwoods. This is far more dull and basically series 1 stuff.  I am also incredulous that Democratic nominee Heather Dunbar would judge that she couldn't come back from the mistakes made in the previous week and it feels rather quick and shoddy and done to allow room for us to focus on President Frank Underwood's GOP opponent, Governor Conroy. Clumsy and dull.

Democrat nominee Heather Dunbar drops out of the race leaving President Frank Underwood uncontested.  The sterile marriage of Frank and Claire is contrasted with the sexually active and fertile marriage of New York Governor Will Conroy.

The Joint Chiefs ask Frank to sanction strikes against an ISIS-like organisation called ICO.   He also has a FISO request into the courts for domestic surveillance via the NSA.  Frank goes to the grave of Edward Meechum, who he's had buried at Arlington, with Vice President Donald Blythe.  He asks a clearly shocked Blythe to be his running mate, but Blythe is reluctant.  The Democratic Party is unimpressed. It appears that Leann Harvey is now Frank's campaign manager.

Leann alludes to the tip she got from Aidan Macallan about Conroy manipulation search engine results when voters used a search engine called Pollyhop.  Leann, Stamper and Frank are now planning to ask the courts for permission to use the NSA for domestic surveillance. Aidan will bid for the job and win and will supply them with voter intel in exchange for unrestricted access. Meanwhile, the Joint Chiefs ask Frank to sanction strikes against an ISIS-like organisation called ICO and as Conroy leaves a rally he's questioned by the press on Pollyhop.

Conroy meets with his key advisors to discuss how to contain Pollyhop, then calls Frank and accuses him of setting up the reporter.  He also asks Frank to hold off the Justice Department but Frank says the facts are on his side.  Frank turns to the camera to discuss the rivalry between Sulla and Marius. Sulla had Marius killed. Conway tells his wife calling Frank was a mistake. Frank tells Claire and they discuss her plans for a gun control bill and look at a replica of the gun used to kill Meechum and shoot Frank.  He helps her practice her meeting with the NRA who threatens to filibuster the bill and hold up a Supreme Court nomination.

Conroy then calls up one of the Joint Chiefs and reveals he knows about the drone strikes and would've been supportive where Frank was unpersuaded.  He gets General Brockhart l to resign but Frank refuses his resignation and accuses him of being in Conway's pocket. But he also says he will sanction the mission.  He can't have the General resign and make the President look weak. Leann is agains the strike because once ICO is eliminated there's nothing to justify the domestic surveillance.

Claire and Frank meet with Party and reject their three vice-presidential candidates as being pro gun. We flash back to them preparing for the meeting. If the Party can get the bill through Congress and get an anti-Gun justice on the Supreme Court, then he'll take a pro Gun Vice President.

Tom Hammerschmidt meets ex journalist Janine Skorsky who tells him that Lucas Goodwin went to see her before he died and that his accusations are true but that she's signed an affidavit so can't speak.

Conroy then does a webcast and with the founder or Pollyhop and plays it less as invasion of privacy but as a way to get to know his constituents. He says that the public should therefore have the right to see his stuff so he's going to give access to all his electronic messaging to anyone who goes to his campaign website. The move is a massive hit.  Now Frank can't have Conroy investigated by the Department of Justice because it'll backfire. So he needs Plan B which is the NSA data, so he calls off the drone strike and tells General Brockhart he won't resign because "he can't even fathom what it would mean to be a civilian."  That night from separate beds, Claire calls Frank to point him to a video on Conroy's website that has him meeting Frank and Claire.  The episode ends with Frank and Claire deciding to destroy their opponents.