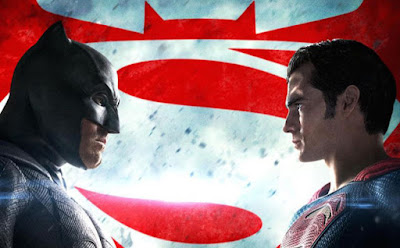 BATMAN V SUPERMAN: DAWN OF JUSTICE is even more arse-numbingly dull than last year's MAN FROM U.N.C.L.E. - another action movie remake that not un-coincidentally starred The Tudor's Henry Cavill.  Cavill, just like his UNCLE co-star Armie Hammer, is an actor of beauty but little charisma.  In fact, it's a sad testament to the lack of star power at the centre of this movie, that the two most charismatic and shaggable men in it are Jeremy Irons (as Batman's butler) and Kevin Costner as Superman's dad.  Jesse Eisenberg plays Lex Luthor like a milder version of Jim Carrey's Riddler.  And what can we say of Ben Affleck's BATMAN?  All our worst fears, carried over from DAREDEVIL, are realised here.  He's the Ben Affleck of SOUTH PARK pastiches, square jaw, Blue-Steel troubled intense gaze, humourless anti-acting.  I'd go so far as to say that the only interesting thing about Batfleck's portrayal is his suit, which looks a bit like someone took an Iron Man outfit and spray-painted it black.  Apparently this is to imitate Frank Miller's graphic novel Dark Knight but it just looked laughably clunky, much like the screenplay.

Oh the screenplay!  I've seen steaming piles of elephant dung with more animation and coherence. The first 40 minutes is an incomprehensible and seemingly unrelated series of scenes which we later learn are laying the foundations for an X-MEN style disenchantment with illegal aliens and other freaks.  Lex Luthor hates Superman because he's jealous of his power - jealous of his godlike status.  The world hates Superman because Lex is framing him for horrid crimes. And Batman hates Superman because his staff were collateral damage when Superman saved the world. Then they unite to defeat Morgoth because their mommas. And they we have a fucking bagpipe player at a funeral in Kansas which we are all meant to get sad about like we don't know the Justice League exists or that Superman is frackin ASLAN in this flick. So thanks to screenwriters Chris Terrio (ARGO) and David S Goyer (MAN OF STEEL).

If you're wondering why I didn't mention Wonder Woman, it's because I'm insulted that she gets introduced in this stupid boys beat-em-up movie. She spends two hours as objectified hot tottie and then utters 16 lines in an amazonian suit that has nothing to do with her superhero outfit. Altogether the best thing in the film but totally underserved.

The problem for DC Comics is that they are five years behind Marvel, and Marvel has established what we expect from a comic book movie - and that is great action set pieces, a believable emotional arc, and some verbal wit.  This movie had the first factor at most, sorely lacked any kind of real emotional involvement, and had about two jokes in its entire running time. I will not be continuing with this franchise and wish nothing but contempt to all who sail in her.  Zack Snyder once again proves that he is a director with a one-note hackneyed visual hyper-style that stomps all over the nuance in the source material. For how much longer will studios allow him to sully our graphic novel heritage?  Cinema-goers - vote with your feet!

BATMAN V SUPERMAN: DAWN OF JUSTICE has a running time of 151 minutes and boy will you feel every one of them. The movie is rated PG-13 and is on global release.
Posted by Bina007 at 00:19