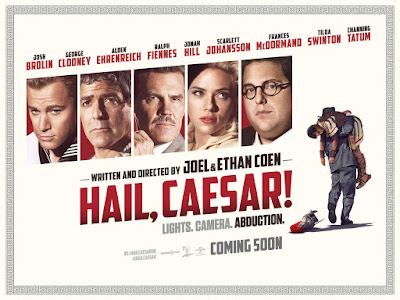 HAIL, CAESAR! is, of all the Coen Brothers screwball comedies, the least funny and the most tedious. I say this with a heavy heart as a great fan of their work and a shared love of the old Hollywood big budget genre pics it aims to lovingly pastiche.  But the best bits really are in the trailer, and their sharp editing in that trailer gives the impression of a movie of high energy and cannon-fire wit. Sadly the real thing runs at an ambling pace, punctuated by the odd set piece, and stutters to its final close.

The movie's protagonist is studio producer and fixer Eddie Mannix (Josh Brolin) - a man with a religious conscience - although this is not something that is explored as in their more overtly philosophical movies.  Mannix spends his days and nights getting his movie stars out of illegal problems and massaging the press all to get his movies off the ground. This is contrasted with a job offer from Lockheed - a job that is grown up and in a real industry. But even as that job offer is made we know that Mannix won't take it, because he loves the industry that he's in, for all its deception, egomania and crazy hours.

The major crisis of the film is that a cell of communist writers called The Future have abducted Mannix' major star, Baird Whitlock (George Clooney) thus holding up production on the titular film.  Minor crises involve a starlet involved in taking dirty pictures, and another supposedly wholesome film star (Scarlett Johansen) being pregnant out of wedlock. Meanwhile, not one but two Hedda Hopper-like gossip columnists (both played by Tilda Swinton) are threatening to out either Baird's abduction, or his use of salubrious past.   Side acts include Alden Ehrenreich as a western star turned dramatic lead being directed by Ralph Fiennes hilariously ass-kissing director Lawrence Lorentz, and Channing Tatum as a Gene Kelly style song and dance man.

If this sounds like a lot to keep hold of, then that's because it is.  And a lot of it could easily be dropped from the film if the Coen Brothers hadn't wanted to spoof a certain kind of Hollywood set-piece.  The Scarlett Johanssen storyline is minor-league amusing in its contrast of her wholesome image as a diving mermaid and sordid past, but honestly, do we need it? Ditto Channing Tatum's character, whose insertion seems merely to give them a tap dance number which is hugely joyless.  Tatum barely cracks a smile - contrast this with Kelly - and maybe he was just having to concentrate too hard on getting the steps right.

And what of the main plot?  Well, let's face it, the abduction plot is all too reminiscent of LEBOWSKI, and only serves to remind us of that far more quotable and enjoyable film.  There's none of the care-free zaniness of that earlier movie in this leaden, deliberate film.   To be honest, you'll get more laughs, a better version of Hedda Hopper, and a keener insight into the seamy dark-side of Tinseltown if you do yourself a favour and watch TRUMBO instead.