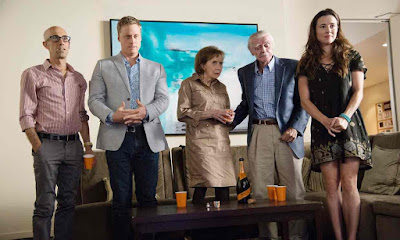 WELCOME TO ME is a truly unique, moving and darkly film from debut feature director Shira Piven and writer Eliot Laurence.  It stars Kristen Wiig as a bipolar woman called Alice Krieg who goes off her meds and uses her lottery winnings to fund a daytime talk show in the manner of her heroine, Oprah Winfrey. Except this show is an unfiltered expression of all of Alice's insecurities, obsessions and historic persecutions.  Despite the fact that she is clearly unhinged, a commercial production company takes her money and puts the show on air, to surprisingly decent growing ratings, until Alice suffers an emotional crisis and runs out of the necessary cash. Along the way, we come to admire her ever-loyal support network of parents, ex-husband and best friend Gina, and have some hopes that a nascent relationship with one of the show's producers might be sustainable.  We also come to have huge sympathy for Alice, despite her bouts of hurtful narcissism.

The performances from the first-rate cast are superb.  Kristen Wiig allows herself to be utterly vulnerable and yet also manages a laconic deadpan humour that takes us through the movie's most awkward and disturbing moments. Linda Cardellini has the most to do as Alice's best friend and their final scene moved me to tears. It's also a pleasure to see Joan Cusack, James Marsden (as the show's producers), and Alan Tudyk (as the ex-husband) and Tim Robbins (as the psychiatrist) in smaller roles - all won over by Alice in the best way.  Only Jennifer Jason Leigh's producer stands in for those viewers put off by Alice's antics - or feels morally queasy by the fact that this entertainment is the result of mental illness.

A movie tackling the subject of mental illness that also purports to be an albeit very dark and dry comedy treads on this ice.  But the results here are provocative, assured, moving and unique.  This has to be one of the best films I've watched this year.

WELCOME TO ME has a running time of 87 minutes and is rated R. The movie played Toronto 2014 and was released in the USA and Canada last year. It is currently on release in the UK.
Posted by Bina007 at 13:57