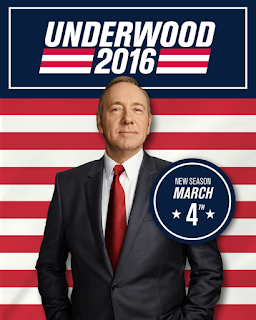 Thoughts: Hugely disappointed with this episode and the direction the writers chose to take the relationship between Claire and her mother. Just as the wall graffiti moment between Meechum and Frank felt forced, this scene felt utterly unearned and out of keeping with the tone of the rest of the show. Cue the swell of violins. Just cheap writing.

First Lady Claire Underwood is now the front runner for Vice President at the open DNC but Frank Underwood looks vulnerable due to super and unconstrained delegates.  Under pressure from Frank the DNC leader delays all votes until the President gets back from Washington where he's launching an attack on ICO.  On the plane back, Frank and Cathy confront each other. She tells him that Jackie Sharp is campaigning for Heather Dunbar in California. Back in Atlanta the convention gets rowdy, wanting to vote.  Claire offers to withdraw so that Frank and Cathy win.  Frank refuses.

In response to Press Secretary Seth Grayson's admission that Doug Stamper asked him to dig up dirt on her, Leann confront Stamper and says she's clean. Stamper starts to lose it. Seth tells him to pull himself together and stop attacking him and Leann.  A messed up Stamper stupidly donotes to the memorial fund of the liver failure man under his own name.

Tom Hammerschmidt continues on his gumshoe trail of Frank's affair with Zoe Barnes.  We also learn that he's liaising with Heather Dunbar.

Meanwhile Tom Yates and Elizabeth bond. Claire realises that her mother has kept her baby teeth.  Reluctantly, Claire and Tom assist her mother in a suicide. After her mother days she tells Frank to schedule the vote and that she has a great speech prepared.  Claire and Tom then sleep with each other.

Frank shows Cathy an article by Petrov that slams Durant in favour of Underwood. Moreover, Claire's going to use her mother's death to gain sympathy.  Frank tells Cathy about the hallucinations he had when he was in hospital. He tells her that he did kill Zoe Barnes and Peter Russo but that it doesn't matter because "that's how good we are at making things disappear." Then he laughs it off as a bad joke.

We flash forward to a condolence video from the Conroys. Hannah comments on the perfect timing of Elizabeth's death.

At the DNC, Durant makes a speech saying that she wants to continue as Secretary of State and throws her support behind Claire Underwood. Claire then delivers Tom's "perfect" speech. Claire and Frank are then both nominated by acclamation.