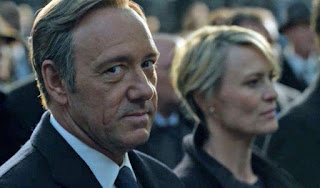 Thoughts:  Notably this is the only chapter of this season written by series creator Beau Willimon. So I guess this sets us up for the House of Cards tumbling in season 5? Is that the last season?  Altogether it feels like this season didn't really have a coherent story arc to itself. It started off as Frank vs Claire. It then became Frank and Claire vs Conway and Tom Hammerschmidt.  I felt we suffered from not having enough of the top drawer writers and directors from the first two seasons involved. You could absolutely tell Beau Willimon's hands weren't on the typewriter. We learn that it's three weeks to the election and the Underwoods are going to "make time" to fight.  The final exchange is chilling and the delicious irony of Frank echoing Obama is the kind of high level dark wit we'd come to expect from this series but all too rarely got this season.

"We can work with fear."

Similarly, the final line of the season is operating on a level of darkness and Machiavellian genius that we should've been operating on for the entire season.

"That's right. We don't submit to terror. We make the terror."

Detailed and spoiler filled plot summary:
President Frank Underwood tells the hostage-takers that the money and troop withdrawal isn't happening and that troops are on their way to their hide-out.  Frank offers to release their leader if he can speak to the hostages.  Playing hardball works - the mother and daughter are released.

We realise that Vice President Claire Underwood's plan was to have their leader Mr Ahmadi released from Guantanamo and placed in a safe house. Ahmadi says he has been humiliated by having to negotiate with a woman. Claire offers to put Ahmadi, who is a former Iraqi Baath party member, and the Baathists back in power if they keep ICO in check. He agrees but on a video link with the captors goes rogue.  The video goes public.

The story about Republican Governor Conway putting pressure on the House Intelligence Committee and lying about it on air hits the press. Conway denies that he influenced the HIC's blocking Frank's plan.  Vice-Presidential candidate Brockhart is also very angry that Conway said he was ashamed of his military service on the released phone-call with the hostage-takers.

Press Secretary Seth Grayson receives Tom Hammerschmidt's email and request for an interview with the President. The Herald will publish online later that day. Jackie Sharp and Remy Danton have clearly spoken to the newspaper. Frank blames Chief of Staff Doug Stamper. Frank demands the interview take place as soon as possible.  Frank denies the allegation and says the three witnesses just have an axe to grind.  After the interview Cathy reveals that the Herald called her. She has as much to lose as the Underwoods.  Frank then resumes his interview with Tom and tells him how far he used Zoe Barnes to plant stories to actually HELP Garret Walker. He denies working with Tusk to impeach Walker. He says he simply failed to help Walker enough. He asks Tom to look him in the eye, but Tom says he doesn't believe him.  The story IS going to come out.

Frank's campaign manager Leann Harvey asks Tom Yates whether he's having an affair with Claire but he denies it and she warns him to be discreet.

Aidan Macallan is told to get some sleep and leave his tech operation in the hands of the NSA - evidently leaving his political leaking open to exposure. Aidan then turns up at the White House with Leann and tells Doug "it's serious."

As the episode enters its final act we see the Feds raid the cabin where the final hostage is being held but it's already empty. Press Secretary Seth Grayson refuses to answer all calls as the Herald article is published. We learn that it's three weeks to the election which Frank expects to lose, following which their will be an investigation. Claire answers that they need to "make time" because they can't fight everything off at the same time. They are going to declare war.

Doug Stamper tells Leann and Seth that the campaign is on hold. Yates asks Claire if the allegations are true and when she says no he says "it's the first time she's lied to him since she stopped lying to him."  Frank speaks to the nation and announces that the ICO leader will sit in a US prison forever and that if any hostages call he will not answer regardless of the final hostage. He says that he is declaring total war on ICO. "Soldiers will do. Civilians will die. There will be pain. There will be suffering.....But we will triumph."

The President orders that no sites should be blocked showing the potential death of the final hostage at 9pm. Cathy Durant says the President's war is just in response to the article. Doug asks to leave to deal with the mess. He meets with Laura.  When the execution happens the Underwoods watch impassive in the Situation Room.
Posted by Bina007 at 15:26