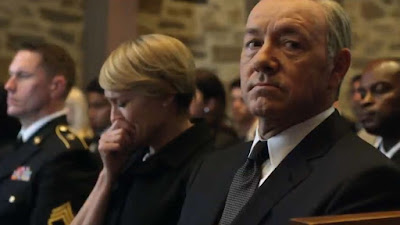 PLOT SUMMARY: In the pre-credits sequence, President Frank Underwood (Kevin Spacey) pushes Secretary of State Cathy Durant into a serious fall to prevent her testifying against him.  The Underwoods' Special Adviser Mark Usher (Campbell Scott) learns that the House is preparing to impeach Frank.

Vice President Claire Underwood (Robin Wright) receives a note from her ex-lover Tom Yates (Paul Sparks).  Jane Davies (Patricia Clarkson) gives her a herbal remedy for her migraine but says Claire needs to be careful with the dosing.

Ex campaign manager Leann Harvey (Neve Campbell) tells Frank about Aidan McAllan and is rewarded with a job.  Frank reveals to his Chief of Staff Doug Stamper (Michael Kelly) that he doesn't fully trust Leann. Later Jane Davies asks her to hand over the evidence Aidan gave her but she refuses.

Frank learns Tom Hammserschmidt (Boris McGiver) may have access to Frank's old cellphone and texts to Zoe Barnes.  He tells Claire and implies that he's going to allow Doug to take the fall.  Claire then invites Doug for dinner with the Underwoods the following night. Doug offers to retire, but the Underwoods demand that he implicate himself in the death of Zoe Barnes.  He excuses himself and we see that he's the one who has been sending the thumb drives in birthday cards to Tom. We learn that Tom can't actually get any data off Zoe's phone but that doesn't matter so long as the Underwoods think he can. Later, Frank pressures Seth Grayson into blackening Stamper's name at the hearing.

Claire tells Frank that Tom has sent her the draft of his completed book. He's sent her the text but with sections redacted.  Frank, angry, says he'll take care of it and that she was stupid to fall in love.  Later Claire meets with Mark but it's unclear why. She then meets with Tom Yates who asks for money. She tells him she still loves him and they have sex. He suffers some kind of fatal attack and we suspect that Claire has given him the migraine medication Jane gave her.

Finally, Mark accuses Jane of sabotaging Frank by lobbying senators in favour of Claire. She admits it. The testimony to congress begins and Leann Harvey supports the Underwoods and Seth Grayson ends up refusing to testify.  Frank wants to testify and waive executive privilege against Frank's advice. Frank then tells Jane he knows she's sabotaging him.  He makes a deal to protect Claire in exchange for something we are not allowed to hear.  Frank then goes on to testify. He admits nothing and accuses the Committee of being corrupt. But he also shocks them by saying he will resign the next day.

COMMENTS: "Welcome to the death of the age of reason."  Claire falling in love with Tom and spilling secrets was psychologically incredible this season and a weak plot link.  Fucking him while he died seemed needlessly camp. I also find it incredible that Doug would be the leaker. This season is therefore a bust for me.
Posted by Bina007 at 08:12