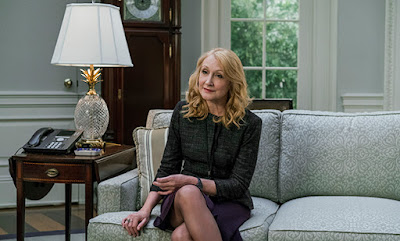 PLOT SUMMARY: In private, Acting President Claire Underwood and former  President Frank Underwood (Kevin Spacey) argue about the best strategy to defeat Conway. In front of the Joint Chiefs, they once again argue about taking out a suspected terrorist.

Leann Harvey (Neve Campbell) speaks with Secretary of State Catherine Durant  about Aidan McAllan (Damian Young) and Cathy suspects that Aidan has dirt on the Underwoods. Cathy then introduces Leann to Jane Davies (Patricia Clarkson) the deputy secretary for commerce. Almost immediately, the President and Acting President, Cathy and Jane are put under lockdown because of a missing truck carrying nuclear waste i.e. a dirty bomb.  As a result, the two state election is postponed without the press being informed why.  Jane offers to ask her contacts about the bomb.  Claire is suspicious as to her level of security clearance. Jane then makes a phone call in private in Arabic and appears to offer Claire the terrorist.   Frank gets out of the bunker and confronts one of the Generals who chose to stay above ground. He accuses her of being involved in a coup and faking the terror threat.  Immediately, Claire gets a call saying the truck has been found and it was simply an accident.  Later, Frank is given photographs of speechwriter Tom Yates (Paul Sparks) having sex with the White House tour guide in the press room.

Finally the Underwoods meet with Mark Usher.  Realising his part in the attempted coup given his ties to Vice Presidential candidate Brockaw, they play him a recording of Brockaw apparently saying he would not obey an order from President Underwood to put soldiers on the ground.

COMMENTS: Well it appears that Patricia Clarkson is the hinge upon which this series turns.  At last, a potentially interesting, powerful and slippery antagonist for the Underwoods.  Also we get a great Underwood victory in the final scene.  Bravo!
Posted by Bina007 at 08:07