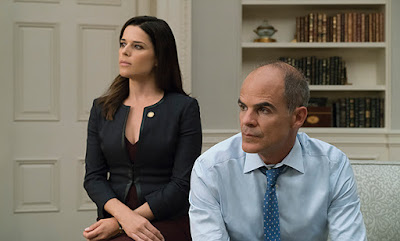 PLOT SUMMARY: First Lady and Vice Presidential candidate Claire Underwood is sworn in as Acting President while the House continues to vote on whether  President Frank Underwood (Kevin Spacey) or Republican Presidential candidate Governor Will Conway (Joel Kinnaman) should be President.  Claire hesitates over giving Frank security clearance. She frankly asks her campaign manager Leann Harvey (Neve Campbell) about Frank's chances in a revote in all 50 states vs in the House. She replies that a revote in just Tennessee and Ohio is his best shot but it wouldn't be what was best for Claire. Nonetheless, Claire proposes the two state vote but is clearly concerned.

An apparently Russian force has occupied a US base in Antartica.  The Russians deny the troops belong to them.  Secretary of State Catherine Durant lobbies Congress to pass sanctions on oligarchs stating that a vote for the measure is not a vote for the Underwoods who may not be around in a week.  The Russian President then reveals that he has custody of IT specialist Aidan McAllan (Damian Young).

We discover that Frank's new personal trainer is his creepy fanboy Eric.

Meanwhile, Conway's campaign manager Mark Usher (Campbell Scott) is trying to woo the Congressional Black Caucus. If they can win their support, Conway will be President.  However, he comes across as arrogant and out of touch.  A frustrated Conway tries to bully the pilot of his private jet to allow him to fly the plane.  When he fails he loses his temper. Mark is able to talk him down. Mark then brokers a deal for a new Supreme Court justice and also agrees to the new two state election so long as its for both President and Veep. In other words, Claire needs to formally step down.  Frank is livid.

Elsewhere, journalist Tom Hammerschmidt (Boris McGiver) continues to block the investigation of the woman who claims she can pin Rachel Posner's murder on Doug Stamper.  However, his sidekick follows up the lead and Hammerschmidt reopens his investigation.

The bored and frustrated speechwriter Tom Yates (Paul Sparks) has sex with a White House tour guide in the press briefing room.

The episode ends of Will Conway's wife looking at him clearly disturbed by playing the virtual reality first person shooter game and Frank on the floor stretching out his back. Claire bluntly tells Frank that he would have lost the House vote. He insults Claire as merely an Acting President.

COMMENTS:  Another basically dull episode showing Claire in the ascendant. The only hope is that the writers really push the fragility of Conway for some dramatic excitement. Words cannot describe how bored I am by the Rachel murder investigation though.
Posted by Bina007 at 08:06