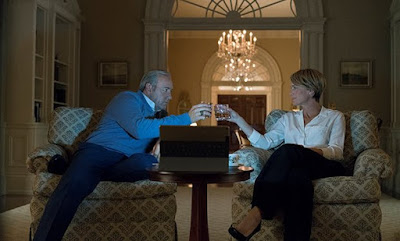 PLOT SUMMARY: Press Secretary Seth Grayson (Derek Cecil) takes part in a conversation with that confirms that Remy Danton is hiring lawyers to give testimony against Frank but that former Vice President Garrett Walker will not so as not to damage the party.  Grayson later offers to testify privately to the committee in exchange for immunity.

Vice Presidential candidate Claire Underwood (Robin Wright) attends a public event announcing that all MTA workers will be given gas masks, continuing to elevate the climate of fear. She is cornered by Ken Caswell who complains that the President won't return his calls, and who tells her that one of Frank's ex homosexual lovers, Tim, has gone missing in suspicious circumstances. She threatens him but later criticises Frank for leaving loose ends undone. She expresses sympathy for Frank's loss but he tells her she's the only person he's truly loved before calling to sympathise with Tim's wife and burning all the evidence of their relationship.

Meanwhile, at the NSA, the IT specialist who secretly helped the Underwoods, Aidan McAllan (Damian Young), realises that some investigators have arrived and could be on his trail.  He tells Frank that he needs to hack a NSA system that covers a lot of Washington traffic to cover his tracks.  The apparent cyber attack convinces the wavering governors to take Frank's funds. Frank stalls on letting McAllan send the fix so McAllan secretly gives the NSA the fix anyway.  Frank goes on air and tells people that Congress must now approve his declaration of war given the ongoing terrorist attacks.

Finally Republican Presidential candidate Governor Will Conroy (Joel Kinnaman) warns a supporter not to bring up the details of his military record in the press.

COMMENTS: Still laying the pipework for the season - the literal sexual frustration of Tom Yates felt clumsy but I very much liked the fake cyber attack storyline.  In addition, perhaps the most stylish episode ending thus far is the camera's slow pull back to halloween pumpkins carved with the faces of Frank and Claire. It's also ironic that where in the real world it's typically the GOP accused of voter suppression, here's it's a Democratic President doing so.
Posted by Bina007 at 08:02