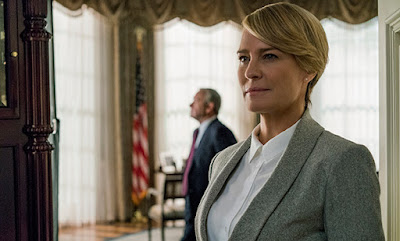 PLOT SUMMARY: It's the day before the Presidential election.  We open on a campaign ad for Republican Presidential candidate Governor Will Conway (Joel Kinnaman). It outlines the heroic act of valour that won him military honours.  Will then accuses President Frank Underwood (Kevin Spacey) of failing to keep the country safe in a live stream.  A public questioner asks why the terrorist Josh Masterson wanted to talk to Will and why he only managed to negotiate the release of Mrs Miller and the daughter rather than the husband who was then beheaded.  A survivor of the attack calls in but can't get Conway to admit that he lied about the event in Afghanistan. We realise that the Underwoods campaign manager Leann Harvey (Neve Campbell) is behind it, but with little apparent success. Conway also brings a new manager on board - Mark Usher (Campbell Scott.)

First lady and Vice Presidential candidate Claire Underwood (Robin Wright) addresses a campaign rally. She then joins Frank for another one. He's losing his voice but refuses her help in a patronising manner. Back on Air Force One, Claire receives information from the Secret Service that the sleeping Frank asked for on a suspicious looking man in the crowd.   Once landed, Secretary of State Cathy Durant (Jayne Atkinson) gives Frank four options of people to arrest that could be the ICO terrorist.  He is reluctant to arrest the wrong person on election day. Doug then brings him information on Conway's "heroic" act.  Much later, Claire wakes up to see Frank awake and fully dressed.  He phones Conway to say he shouldn't feel ashamed about whatever happened in Afghanistan.

Meanwhile Chief of Staff Doug Stamper (Michael Kelly) chides the ex-Vice President and now Governor in a swing state for failing to implement voter centres.  Stamper accuses him of making excuses and lying and he agrees to comply.  Later Doug has a casual hook up but she leaves because he's not present in the room.

The morning of the elections, campaign manager Leann Harvey (Neve Campbell) gets the early numbers and they're not good for the Underwoods. Nonetheless they are defiant.

COMMENTS: Given that this was the pre-election episode I found it frustrating and dull. The Underwoods didn't really have anything on Conway who is bland as a antagonist.  They are basically united.  The pullback to Claire's lover in her bed is no longer shocking as we are used to their open marriage.  The testimony of the press secretary came to nothing. And there are no consequences to the IT attack yet.  A complete non episode with the exception of a rather nice and creepy tracking shot round the corner of Doug's bedroom. The theme of frustration continues - both in terms of Doug's hookup's sexual frustration and Claire's political frustration at not being Veep yet, and one suspects, not being President yet.