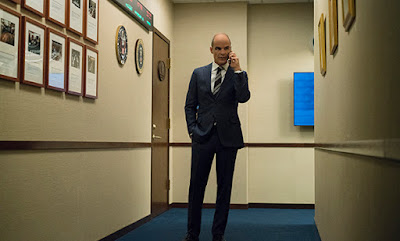 PLOT SUMMARY: The day of the Presidential election arrives and turnout is surprisingly low. Republican candidate Governor Will Conway (Joel Kinnaman) and his campaign manager Mark Usher (Campbell Scott) are quietly confident and Will's wife proceeds to "fuck the president".

President Frank Underwood (Kevin Spacey) gets what appears to be a genuine terrorist attack tip on a voting centre and warns the relevant Governor. The attack occurs and Claire addresses the nation telling the electorate that it is their duty to get out and vote, hoping to reverse the low voter turnout.  Usher calls the Governor of Tennessee offering extra security but the terrorist attack occurs nonetheless. Chief of Staff Doug Stamper (Michael Kelly) bullies the Ohio Governor into closing voting booths with manufactured intel from IT specialist Aidan McAllan (Damian Young) in order to counter gains for Conway in the South, previously Underwoods base.  That said, Frank calls Conway to concede but refuses to do so in public just yet.

In the early hours of the next morning we learn that there are lawsuits alleging electoral malpractice in almost every state holding up the result. Aidan McAllan texts Leann to say he can no longer work for the Underwoods.

COMMENTS: "The American people don't know what's best for them.  I do.  I  know exactly what they need. They are like little children, Claire.  The children we never had. We have to hold their sticky fingers and wipe their filthy mouths. Teach them right from wrong. Tell them what to think and what to feel and what to want. They even need help writing their wildest dreams and crafting their worst fears. Lucky for them, they have me. They have you. Underwoods. Underwoods 2016, 2020, 2024, 2028, 2032, 2036. One nation Underwood."  And finally -  finally we get the diabolical Frank we always wanted!  A man willing to violate term limits in order to forestall the inevitable election loss.  And yet apart from the last five minutes of the episode this was still fairly dull.