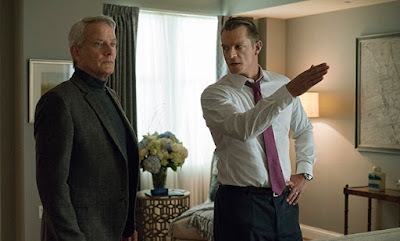 PLOT SUMMARY: Nine weeks later, and President Frank Underwood (Kevin Spacey) breaks the fourth wall to tell us that two states refused to certify and so there has been no result. The Supreme Court is down a member and in deadlock and government is crippled. As in the last season of Veep, the vote therefore transfers to the House per the twelfth amendment by simple majority.  Meanwhile protestors barrack the White House.

Inside the White House Frank meets the strange man called Eric who is an actor, personal trainer and military history recruiter. He is clearly a mentally unstable and obsessed with Frank.  Vice Presidential candidate and First Lady Claire Underwood (Robin Wright) meets with Underwoods campaign manager Leann Harvey (Neve Campbell).  Leann tells Claire that Frank's approval rating is just 19pc whereas Claire's is 30pc; that there's resistance to a simultaneous vote for President and Vice President and that Claire should consider what happens in the event of a split ticket. This view is  later echoed by Republican supporters and Claire seems open to a split ticket. Even the current Vice President tries to flatter Claire into breaking away from Frank.

Meanwhile, Leann has tracked IT specialist Aidan McAllan to Jakarta. He then phones her and asks her to join him. He also threatens to leak information on the Underwoods unless she calls off the FBI search. She confides in Chief of Staff Doug Stamper (Michael Kelly) but he appears reluctant to act.

Republican candidate Governor Will Conway (Joel Kinnaman) is playing a military first person shooter and is clearly emotionally disturbed by it.

A woman comes forward to journalist Tom Hammerschmidt (Boris McGiver) with a story about Chief of Staff Doug Stamper (Michael Kelly) but he doubts her. Later, Doug hooks up with the woman who left him earlier for not being present.   Doug then tells Frank that he's having trouble threatening people into giving him the requisite 26 votes. Frank lashes out at a clearly shocked Doug but then apologises.

COMMENTS: "Meet your new daddy". Well this was a dull episode - again - which can be compressed into two things - Claire is now the popular force, and Aidan is a problem.  It feels to me like their is no menace in this season. The murders in prior seasons are distant lurking threats but one doesn't feel as if Frank could literally kill someone now.  Even Tom Hammerschmidt seems bored by those early plot lines.  There are no worthy antagonists - Conway is a psychological wreck - and no fascinating psychological dramas. Even Doug Stamper's sexual liaisons seem tame compared to previous seasons. Five episodes in, one wonders if this really is the impact of Beau Willamon leaving?
Posted by Bina007 at 08:05