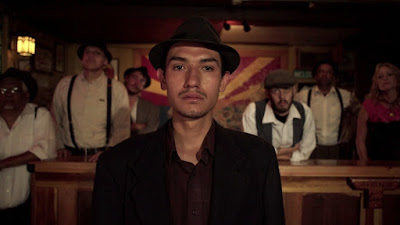 Documentarian Robert Greene (KATE PLAYS CHRISTINE) returns to the BFI London Film Festival with BISBEE '17 - an examination of a traumatic event that took place in a small town in Arkansas a hundred years ago.  Back then, Bisbee was a small mining town, effectively owned by three corporations. Labour conditions for the workers - many of them Mexican immigrants - were horrific.  The IWW union came to town and started distributing leaflets and recruiting members.  Finally, they staged a strike.  The largest corporation then colluded with the sheriff to create a posse of 2000 men; to round up the striking workers; to march them out of town and onto a train; and to dump them in New Mexico.  Needless to say, this action was illegal, but no-one was ever prosecuted for carrying it out.

What's fascinating is seeing how this event still reverberates through the now diminished town of just 5,000 people. Descendants of the posse argue that their forefathers did what they had to, to maintain mining production during a period of war, and to prevent America being corrupted by socialism and communism, as Russia had been.  Those who identify with the workers (new immigrants, as let's face it how many of the original workers came back?) argue that this was just basic protection of a corporation, using the war as an excuse for harsh and illegal tactics. They speak to how even today, labelling someone as Other, and thus not American, makes it easy to deny them their rights.

And so the documentary proceeds by showing us a town recreating events that are still controversial, and personal, with moving echoes of political feeling a century later. In the America of Trump and Sanders, the divisions are still very real. I was particularly moved by the experiences of a young hispanic man who seems deeply sensitive and nuanced in his thinking, re-enacting the plight of his ancestors. I was also moved by one of the re-enactors singing old protest songs as she sewed her costume. But where we really see the benefit of this is how viscerally it effects us to see men rounded up and walked out of town like cattle or convicts. And the man doing the rounding up admitting that as much as he sympathises with the original sheriff who has since been painted a villain, once you see these men being marched out, and you drive passed them, it just feels wrong.

Many contemporary documentaries use the tactic of re-enactment to get to the emotional heart of a situation and allow us to reflect on how the topic might play today.  But this is one of the most successful examples I have seen of that. And it's really testament to the power of this exercise that an event I'd never heard of had such resonance and urgency.

BISBEE '17 has a running time of 112 minutes and is rated PG.  The film played Sundance and London 2018. It was released in the USA in September but does not yet have a commercial release date for the UK. There are still tickets available for one of the two screenings at this year's BFI London Film Festival.
Posted by Bina007 at 11:25