THE GOSPEL ACCORDING TO ANDRE 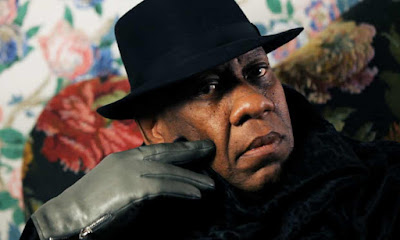 THE GOSPEL ACCORDING TO ANDRE is Kate Novack's beautifully curated documentary about fashion icon Andre Leon Talley.  For those fans of THE SEPTEMBER ISSUE, or THE FIRST MONDAY IN MAY, this doc adds to our insight into one of the literally towering figures of style.  Talley.  This doc may be a stretch for those without an interest in fashion, but there's a lot here about surviving the Jim Crow south and continuing racism in New York and Paris that may prove of interest.

The story moves chronologically through Talley's life, beginning in North Carolina of the segregation  era.  Talley speaks eloquently about being inspired by the style of the men and women in their Sunday best, but also of the Jim Crow racism that made coloured women wear veils to try on hats in a department store lest they dirty the wares.  He speaks briefly about the prejudice against his outre personality at home, but is saved by the unconditional love of his grandmother. The first of such relationships.  Talley then escapes through a scholarship to Brown to study French, but it seems like it was his artistic friends and RISD that opened up his horizons to fashion and perhaps gave him his first safe space to be gay.  He then scores a letter of introduction to assist Diana Vreeland on a Met exhibition, and she becomes the second source of unconditional love, opening doors to a career in fashion journalism - first at Interview magazine with Andy Warhol in Studio 54 New York - then as the Paris editor of Woman's Wear Daily - and finally at Vogue with Anna Wintour.

Talley's talent is in no doubt. As Tom Ford says in an interview here, he truly knows the sources to which each collection refers - well versed in literature and fine art. But there's something beyond talent - a desire to succeed and a courage to be bold and daring.  His very existence as a dramatic gay black - latterly obese - man is of itself subversive.  And his presence on the front rows of fashion shows opened up vistas to those who followed him. Talley challenges definitions of who high fashion is for, what body shape can wear couture, and what a black man should be. He shows diversity within diversity.

What this documentary makes clear, however, is the sacrifices he has made. Not just putting career before personal life and ending up tragically alone, but in suppressing rage and pain.  He rarely talks about homophobia and racism, and when he does he says he rises above it. But as Anna Wintour astutely reveals - he's smart and sensitive - he knows what's going on - and it clearly causes him hurt. One might wish he had spoken of it more in this documentary, but then that wouldn't be Talley - it wouldn't be the man who could forge through and rise above. But I love that throughout he never forgets his roots, and honours his ancestors who survived slavery and lynching.

THE GOSPEL ACCORDING TO ANDRE has a running time of 93 minutes and is rate PG-13. The film was released in the USA in May of this year and is currently available on streaming services in the UK.
Posted by Bina007 at 11:37