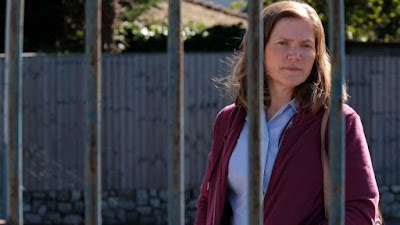 THE FIGHT is the directorial debut from actress and comedian Jessica Hynes.  She has crafted a nuanced, quietly thoughtful script and created a drama that surprises and moves.  What's even more impressive is that she shows a real flair for framing her shots and capturing wildlife and landscape in a suburban setting.  The result is a film that is so much more than a standard boxing film. In fact, the title is best seen as allegorical - yes, the protagonist does turn to amateur boxing to regain some control and pride in herself - but this isn't a film that focuses on training montages or fight scenes. Rather THE FIGHT is about the struggle just to survive life - the emotional pressures of extended family, the remembered and reinforced cycle of abuse, the struggle to connect.

As the film opens we meet Tina (Hynes), a mother of three in a seemingly happy marriage, struggling to find time between her home life and working a full time job. Her parents' marriage is falling apart. Her daughter Emma is being bullied at school, apparently by the daughter of Tina's old school nemesis.  And in between all this Tina finds an escape by entering an amateur boxing competition, mentored by a character played by Cathy Tyson (great to see her back on our screens.)

What I love about this film is that it overturns our expectations.  For a start, the men are basically good guys - and the emotional and physical violence is perpetrated and survived by women.  This is story of multi-generational hurt and anger that creates yet more hurt and anger - but no character is a simple villain.  Instead, this is a film filled with patience, compassion and understanding. And this is portrayed by four strong female actors - Hynes, Rhona Mitra as her old schoolfriend, Anita Dobson as her mother, and the actress who plays Mitra's daughter.  The focus on the female experience of bullying, addiction, acceptance is rare and welcome.

I also love Hynes feel for pacing and framing.  There's a wonderful shot where Tina's mother catches her father living at Tina's house and it's framed as a split screen with Tina inside, the father outside, both caught in the act.  And another where Tina is jogging through a street of row-houses and we pan up to see a majestic aqueduct. Or another where Tina is apparently in a beautiful field of lavender but it's really just her tiny front garden.  And then there's Hynes ability to just let the actors do their thing without over scripting a scene. I'm thinking of one in particular in a river between two women that's just so delicately balanced and moving...

I don't want to say more for fear of spoiling the plot. Suffice to say that THE FIGHT is a truly impressive debut and that I can't wait to see what Hynes does next.

THE FIGHT has a running time of 91 minutes. The film does not yet have a commercial release date.
Posted by Bina007 at 23:35