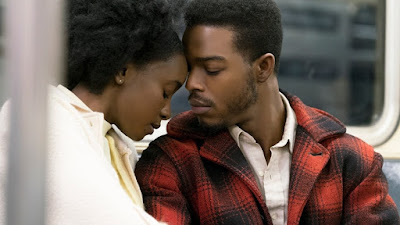 IF BEALE STREET COULD TALK is a film that is over-long, and compounds the faults of the source novel with many of its own. I simply cannot understand the critical acclaim for a film in which the central characters are ciphers, and do not grow, and the tough questions around the plot are stubbornly left unaddressed.

The film is based on the novel by James Baldwin, and is set in a racially divided New York of the 1960s and early 1970s.  It's told as a single flow of narrative with many flashbacks by Tish - a 19 year old girl of almost supernatural innocence and goodness.  Her beloved Fonny has been arrested on a trumped up rape charge, leaving a pregnant Tish in the care of her far feistier and more interesting family.  Her father and putative father in law commit theft to fund Fonny's defense.  Her mother at one point goes to Puerto Rico to harass the rape victim into dropping the charge. But as the book ends the outcome of all this is dark and ambiguous although Baldwin seems to want to leave us with an impression of hope in Tish's continued optimism. I always found this wilfully obtuse - read why for spoilers underneath the release information below.


The new movie adaptation, from MOONLIGHT's Barry Jenkins, exacerbates the faults of the novel.  Tish (KiKi Layne) and Fonny (Stephan James) are even more banal and naive and dull than they were in the book. At least book Tish and Fonny show some signs of emotional growth at the very end of the novel, but in the film it's as if they are written to be paragons of virtue and love - martyrs - pure and innocent. And that's just dull. The film only comes alive when the focus is off of them - when the families take over. There's a superb early set piece in which both sides go at each other and it's fantastic. More of sister Ernestine please!

But this is the kind of book and film that this is. Good people are good. Bad people are bad. Even the lawyer (Finn Wittrock) is an earnest martyr, and the cop (Ed Skrein) is an evil racist. You can see this in the subtle reshaping of the source material.  Unlike the novel we don't see Tish steal, we don't see Fonny steal, we don't see Tish drink brandy through her pregnancy.  The characters are even rendered childlike in the way that Tish losing her virginity is shot - without the final moment of the novel in which they survey the mess of bodily fluids they have made. This film is altogether more manicured, more lush, less messy, less real,  less disturbing than the original. Why else leave out the crucial confession that Daniel Carty makes that he's been raped in prison?

Worst of all - as my spoiler note makes clear below - the film refuses to interrogate the cost of defending Fonny on those peripheral to the story and tries to give the ending all too neat a bow. But by this time I was bored beyond recognition and just wanted to leave the cinema.

IF BEALE STREET COULD TALK has a running time of 117 minutes and is rated R. It played Toronto and London 2018. It will open in the USA on November 30th and in the UK on January 18th 2019.


Spoilers - In the novel the cost of defending Fonny is incredibly high and dark. His father commits suicide when his own thieving is discovered. And the woman that Tish's mother harasses has a miscarriage and becomes very mentally ill. It seems bizarre to me that the main message we are meant to take out of this is hope and that we are allowed to see no impact of this on our main characters.  Regarding the ending of the movie, where Fonny cops a plea deal and so has hope to be let out at some fixed date, in the book he has no hope of escape.  His family is raising bail, but he's not yet released, and even when is, with the accuser gone mad, there's no hope of a trial any time soon, and Fonny will be left in purgatory.
Posted by Bina007 at 09:50