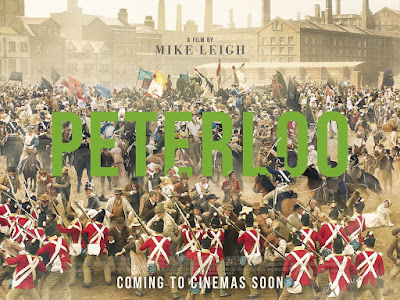 In the early decades of the nineteenth century, the European establishment lived in justified fear of revolution. The French had assassinated their monarchs, leading to a tyrannical Terror, and unleashing 20 years of Napoleonic wars that finally culminated in the bloodshed of Waterloo in 1815.  And the British government was highly sensitised from both the American revolutionary wars and the more recent Irish Rebellion of 1798. It was not impossible to imagine that Britain was in pre-revolutionary times - a mere 25 years later Marx and Engels would come to the same conclusion.  In doing so they were drawing on their experience of the major industrial towns of the North - Manchester chief among them - areas of rapid urbanisation, appalling social conditions, little labour protection, and no political representation.  This led many to agitate for reform - notably extension of the franchise and reform of the rotten boroughs. But some of the more famous orators of the reform movement were more radical - agitating for an abolition of the monarchy, for example, which was by definition treasonous.

This combination of a government actively looking for sedition, and a  reform movement easily charged with treason, created the ideal conditions for a disaster, and that disaster was Peterloo.  Four years after Waterloo, sixty to eighty thousand northern workers gathered in St Peter's Field, Manchester to hear the famous, but peaceful, orator Henry Hunt. They were almost entirely unarmed.  But the local magistrates didn't wait for provocation - their prejudice made them believe that the very gathering was seditious.  They sent in the local yeomanry.  One has to understand that this was an age before we had an actual civilian police force.  And that while the yeomanry was expensively kitted out, these were just a bunch of untrained and untested local militia who unsurprisingly lost control and ran people down.  This caused chaos, so the magistrates sent in the actual armed forces to disperse the crowd. Unfortunately, the cavalry was poorly commanded (the Waterloo hero who should've been there was at the races watching his horse compete) and added further to the carnage. Around 15 people died and many hundreds were injured, entirely unnecessarily.

The tragedy of the needless death of innocent men, women and children was confounded by the fact that Peterloo didn't really achieve anything. Indeed, by prompting the passing of the regressive Six Acts, if anything, it probably set back the cause of reform. Nonetheless, it remains an important event in British history because it's an appalling example of what happens when a government turns its army on its own people. And this lesson remains vital.  The Poll Tax riots in my own lifetime - with the government turning horses on its own people - is a case in point.

Accordingly, I was very excited to hear that Mike Leigh was making a film about PETERLOO - and the failure of that film is a tragic waste of an opportunity to create a vital and urgent piece of media that could potentially speak to people who haven't heard of the event. I can't imagine else will be rushing to cover this topic soon and that's really sad.  Where did Mike Leigh go wrong?  After all, I loved his previous BFI London Film Festival entry, MR TURNER, and this film reunites Leigh with the composer and cinematographer - Gary Yershon and Dick Pope - from that film.

The first problem with PETERLOO is that pretty much the first ninety minutes of the film consists of different people reciting speeches or reading letters aloud, in static tableaux. The language is not updated and sounds anachronistic and over-precious to modern ears. The resulting footage is boring and visually unexciting. I would much rather have just read a history book.

The second problem is that when do we break away from the orators to some representative ordinary working class people, they are drawn so broadly as to be caricatures with all their "sithee"s.  There's even a Simple Jack character who survived a very thinly sketched Waterloo who's clearly set up to be sabre'd at Peterloo. The whole thing is rather condescending and also shows that maybe Mike Leigh was being too careful with this historical material and didn't feel he could properly fictionalise it. The problem is that when you don't draw us in on an emotional narrative level you may as well make a documentary rather than this plodding history.

The third problem is that Mike Leigh condescends to us - the audience. There's so much Basil Exposition stuff in this film it's infuriating. The worst example is when the newspapermen are sitting in the office of the Manchester Observer saying things like "I don't think our READERS will understand what Habeas Corpus is".  "Well, it's the cornerstone of our constitution!" You can tell that the entire scene has been put in to explain habeas corpus to modern audiences.

Finally, for all its earnest attempt at fidelity, PETERLOO fails to give us context when it really needs to. I wonder how many viewers will understand the difference between the yeomanry and the army, for example. I also missed visual context. This film was all tell and no show.  I needed Leigh to lift his crane up and show us the dynamic, bustling urban sprawl of Manchester, and to let us feel the insatiable growth of this city and the injustice of its not having an MP. Similarly, if you are going to show Waterloo and its traumatising impact on a young boy, lift up your crane and show us that battle! Don't just have a single cart and a single explosion. And if your budget doesn't allow for more or better, than work your script.

PETERLOO has a running time of 154 minutes and rated PG-13. The film played Venice, Toronto and London and will open in the UK on November 2nd and in the USA on November 9th.
Posted by Bina007 at 21:43