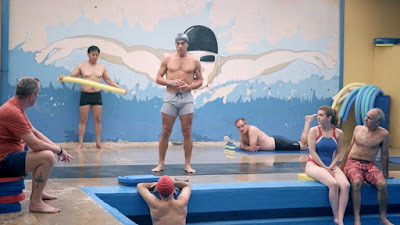 THEATRE OF WAR is an examination of the after effect of the Falklands War on participants from both sides of the conflict. For British viewers such as myself, we remember the war as a very minor conflict in the early 1980s, where a post-coup Argentina invaded islands that had been held by Britain for 150 years.  We were taken by surprise, but dispatched a taskforce, and won them back within 70 days.  Coming at broadly the same time as the wedding of Charles and Diana, and seeing the soaring popularity of the victorious Mrs Thatcher - relieved for a moment from the dire and divisive miners' strike - this period seems to be one of momentary national pride.  The abiding memory is of The Sun's superb headline "Gotcha!" on the sinking of the Argentinean ship The Belgrano. I say superb because it's a piece of superbly memorably copywriting -regardless of the lack of empathy it encapsulates.  It seems to sum up the mood of the time.

Since then, of course, we have been mired in far more ambiguous and unsuccessful wars in Afghanistan and Iraq with far less well delineated moral lines. (I show my colours here - I *do* class the Falklands as having been invaded and rightly defended - a point made by one of the Royal Navy Commandos, called Lou Armour, in this doc).  And we are in general far more familiar with the mental stresses caused by fighting a war, including but not limited to PTSD.

And so I found that Lola Arias' documentary was not particularly breaking new ground by showing us soldiers struggling to cope with the aftermath of war. Their personal testimony was powerful, but I wish she had just let them speak rather than forcing them into her arthouse conception of re-enactment as a means to further explore hurt.  They all seemed surprisingly open about their experiences and I just don't think those re-enactments added anything.

Worse still, by reminding is of Joshua Oppenheimer's THE ACT OF KILLING, they created a dangerous equivalence.  Oppenheimer used re-enactment to tease a war criminal into admitting his culpability.  Is Arias trying to do the same with the British soldiers?  Does she see them as in the moral wrong?  I only wonder because the story she comes back to again and again is of a British soldier witnessing an Argentinean die, rather than the other way round.  It's as if she's trying to use his trauma to paint a picture of wider British guilt. And the soldiers themselves seem to agree - with the Brits drinking at a bar, saying that this is basically an Argentinean project, and that it's not what they bargained for.

A better film - more deserving of our time - might have used this powerful testimony from both sides, and situated within the context of historians and politicians discussing the events of the time. Sometimes it's not enough to discuss subjective feelings - we also need context and critical examination of the kind Arias clearly is not interested in.

THEATRE OF WAR has a running time of 77 minutes. It played Berlin, SXSW and San Sebastian 2018.  It is playing in the documentary competition at this year's BFI London Film Festival.  There are still tickets available for both screenings.
Posted by Bina007 at 17:05