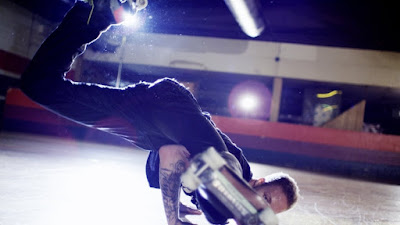 UNITED SKATES is a wonderfully uplifting but socially aware documentary about african-american roller-rink dance culture by debut filmmakers Winkler and Brown. They explain how back in the days of covert segregation different roller rinks labelled certain nights as "adult nights" - a signal that this was when african americans could skate.  It was a safe space for creative expression and just plain letting loose - and at a time of few black dance clubs - a place where musical talent could be fostered. For instance, I was shocked to find out that a lot of major rap artists - from Dr Dre to Queen Latifah to Busta Rhymes - got their first breaks performing in roller rinks! And this doc features interviews with some of them - including members of Naughty by Nature and Salt'n'Pepa. Move forward to the modern day, and roller rinks are being threatened by rezoning for higher use value - developers want to knock them down and build condos or offices.  This doc shows powerfully how far that risks undermining community culture and the protests against the inevitable. But far from ending on a depressing note, this fantastically engaging and insightful film shows us that roller culture survives and in its most fascinating sequence - how different cities and states have their own dance styles.  I honestly could have watched double the footage of different states showing their moves at a national skate-fest -the sheer talent, exuberance and skill on show was mesmerising. And that's what great docs do -right? They take a subject you have no previous interest in - I've never put on a pair of skates - show you why it's vital and urgent, and pique your interest.

UNITED SKATES has a running time of 87 minutes. The film played Tribeca and Melbourne 2018. There are still tickets available for both screenings at the BFI London Film Festival.
Posted by Bina007 at 09:03