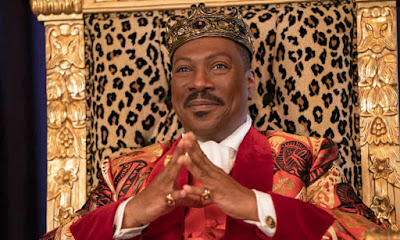 COMING 2 AMERICA is the feel-good, nostalgic comfort-watch we want and need right now. Released on the first anniversary of my personal Covid lockdown, at a time when we've all been deprived of friends, families and laughter, this movie feels like a personal gift from Eddie Murphy and Arsenio Hall to all of their fans.  And yes, I AM a fan of the original. I can't count the number of times I watched it as a kid, and on a recent rewatch I can attest that it holds up. The original was the story of a warm-hearted Prince and his rogueish sidekick going to Queens (pre-gentrification) to find a bride that will want the Prince for himself, rather than for his title. But along the way it poked fun at jheri curls, lascivious preachers, argumentative old black men in a barber shop and terrible pastiche bands. Let us NOT forget that Sexual Chocolate INVENTED the Mic Drop! Of course, it was a film of its time too. So my husband and I were wondering whether they'd keep the more luridly sexual stuff like the palace bathers or even the very concept of Murphy dressing up in Whiteface to play an old Jewish barbershop customer. Well, I am pleased to report that Kenya Barris' superb script keeps everything we loved about the orignal and doesn't water down the humour for a more PC time. The hat-tips and easter eggs are scattered liberally and really reward the ardent fan - from recasting Garcelle Beauvais as a rose-scatterer, to a rousing finale with Sexual Chocolate, to bringing back the rapping twins we met briefly at the bar. But best of all, we keep the foul mouthed My-T-Sharp crew, and dismiss any concerns of political incorrectness with a swift and brilliant short scene that neatly delineates the boundary between comedy and offense for us.
So what's with the story? Decades after the original, Prince Akeem is happily married with three literally kick-ass daughters. The problem is that they cannot inherit his kingdom because they aren't sons. Accordingly, Akeem's dying father says he should find the illegitimate son he fathered in Queens after a quick drug-fuelled one night stand days before he met his still loving wife Lisa. We quickly bring this kid Lavelle (a rather anonymous Jermaine Fowler) to Zamunda, along with his mum (Lesley Jones) and uncle (Tracy Morgan) and most of the humour comes from these siblings from Queens getting used to the luxury of palace life.  The dramatic tension, such as it is, comes from Lavelle feeling he doesn't want to be a king in the mold of his grandfather, or to marry General Izzi's subservient daughter, much as his father before him.
It's kind of strange to say but neither Murphy nor Hall steal the show in this sequel except in their prosthetic heavy avatars in the barber shop.  For me, Murphy and a old Jewish guy greeting Akeem and Semi after 30-odd years as "Kunta Kinte and Ebola" was worth the price of admission alone. Much of the comedy comes from Jones and Morgan as the Queens siblings. But all of them are thoroughly upstaged by Wesley Snipes as General Izzi, a neighbouring warlord who falls somewhere between kilt-wearing Idi Amin and Idris Elba in Beasts of No Nation, but with ALL the swagger. His costumes, dance moves, accent - it's all instantly iconic. And that's the key to why I found this movie successful - yes it's fanservice, and I was serviced - but there were enough fun new characters to make it feel fresh too. I couldn't have asked for more.

COMING 2 AMERICA was released on Amazon Prime Video on March 5th. It has a running time of 110 minutes and is rated PG-13.