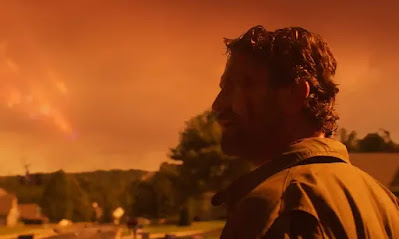 Director Ric Roman Waugh (ANGEL HAS FALLEN) reunites with leading man Gerard Butler (300) for a surprisingly well put together disaster movie written by Chris Sparling (BURIED). I'm not saying that the film does anything radical or unique in its narrative structure. Rather it's surprisningly well crafted in its use of special effects and does a lot with a little.  There's something weirdly credible about the story and its plot twists, and I'm gonna lose all credibility by saying that the acting is GOOD!
As the film opens we meet Gerard Butler's structural engineer tentatively opening the door to his own house and having an awkward conversation with his wife (Morena Baccarain - DEADPOOL).  As the film goes on we'll figure out that he cheated and their marriage is hanging on by a thread.  Pretty soon news reports come in about a massive asteroid about to hit earth - starting with a mega fragment that takes out Florida.  We ramp up to the threat of an extinction event collision within about ten minutes.
The plot mechanism is that certain Americans have been pre-selected to leave for a shelter in Greenland and can take their immediate family. Guess what - our hero is one of them. So the film is basically a race against the clock to get to the designated military base - get the wrist tags that get you passage on a flight - and get the frack out of dodge. The plot twist is that the parents are split up because the kid leaves his insulin in the car, and then he can't get on the plane because he's diabetic.
What I love about this film is that as hokey as the narrative arc is - fragile relationship healed in crises; cute kid in peril; supermarket being ransacked; people turning on each other - it's filmed so very stylishly. The way in which the asteroids are depicted across the sky is stunning and the peril of the extinction strike is beautifully essayed. The story felt credible. Butler and Baccarin sold it to me. I actually cared about their fate and wanted to see what happened next. Honestly, this film is really really good!

GREENLAND was released in some countries last summer in cinemas but in the USA on streaming services last December and in the UK this February. The film has a rating of PG-13 and a running time of 119 minutes.