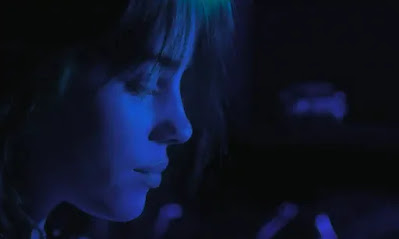 I'm clearly not the demographic for Billie Eilish's whispered teenage angst slash stomping jumping Gucci clad stage persona. But I was curious to watch R J Cutler's new two hour documentary and learn more about this teenager who is both a pop culture icon and has swept the Grammys. I was sceptical at the over two hour running time going into the film, but I have to say that the documentary did indeed hold my interest for two hours and I would recommend it as a sociological depiction of any young star catapulted to fame.

Billie Eilish comes across as a nice kid - talented? yes although her resistance to singing beyond a whisper makes it hard to discern how much.  I was actually far more impressed with her elder brother who evidently writes a lot of the music and produces it - and surely its the ethereal electro tone that's the real trademark here. I wonder if he resents her success as the face of his music?  The parents are a bit weird as is the whole home-schooling/ minor league actors/singers creating little talent show performers vibe. But you can see they really love their kids and are loved in return and that they have a justified fear about what happens to Billie now she's famous. The most moving part of the doc is when Billie passes her driving test and drives off, and the dad has this emotional moment where he's worried about her leaving but needs to let her - rationally he'd coddle her forever but knows he can't.

There's a deep foreboding throughout this film. Billie's insta-famous open-ness with her fans is concerning, and we see she clearly has issues with setting emotional boundaries in her relationship with her douchebag ex-boyfriend. And yes she has a close relationship with her family that's saving her but what happens when one day she falls out with her brother or her mum and is left vulnerable to the world? And how on earth is that relationship going to stay normal when the brother depends not his sister for employment and the mother's role is to coddle Billie with reassuring reviews of her performances? It's so telling that when Billie (totally justifiably) flips out at meeting endless studio hacks after a show, her mum's immediate response is "we failed you". This isn't a relationship of honesty but of keeping the bandwagon on the road.  Billie can never do wrong.

Maybe it's my recent viewing of Framing Britney Spears, but I just look at Billie Eilish and see an accident waiting to happen, and when it happens it's going to be worse because it's going to involve her family. Lets just hope that her body and mind hold up.

BILLIE EILISH: THE WORLD'S A LITTLE BLURRY has a running time of 140 minutes and is rated R. It was released by Apple+ in February.