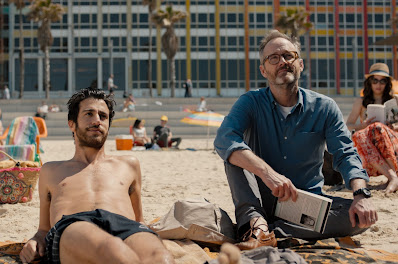 SUBLET is a quietly stunning film from Israeli writer-director Eytan Fox about the unlikely and transformative brief affair between an older American writer and a young Israeli film-maker.

The entire film takes place over five days in Tel Aviv, where the somewhat haphazard but charming Tower (Niv Nissim) sublets his apartment to the New York Times travel writer Michael (John Benjamin Hickey).  For the first hour of its brief running time we think we have a certain perception of Michael as a rather timid man, dealing with the bombshell that his husband back in New York has approached a surrogacy agency without his knowledge or consent. But there are hints that his relationship toward parenting are more complex, and this opens up beautifully in the final third of the film. By contrast, Tomer seems to live entirely in the open - openly gay, sex-positive, unabashed to admit his lack of funds, even making films that are provocative and challenging but without subtlety or sub-text. Tomer is also a little lost, and again, in a pivotal late scene with his mum we realise that he too might be looking for something from Michael that is beyond a lover, and perhaps paternal.

This quiet, drily funny film says so much without words and rests on the superb performances from Hickey (unsurprising - he is one of our finest stage actors) - but also in a debut performance from Niv Nissim.  The performances are complemented by incredible framing and lensing from DP Daniel Miller that lifts this film into something beyond just a beautifully performed romantic dramedy.

Most of all I love that the film resists cliche or lack of realism in its denouement. Rarely has an airport hug been so loaded with emotion, meaning and transformation - rarely has a shyly broadening smile on a young man on a bike been so full of promise.

I feel I have taken both of these characters to my heart. I would love to see a follow up film five years ahead. This level of engagement and empathy speaks to the profound power of this film.

SUBLET has a running time of 89 minutes and is not yet rated. It also does not yet have a commercial release date. It played Tribeca 2020 and BFI Flare 2021. It will be released in the USA in June 2021.