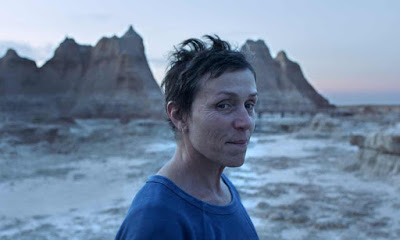 NOMADLAND is a truly beautiful, affecting and rightly award-winning film featuring a stunning performance from Frances McDormand. She plays a 60 something woman called Fern, caught like so many of her generation with insufficient savings to retire in the wake of the Global Finacial Crisis, and no job when the town's factory closes down.  No longer able to afford a home, Fern becomes a Nomad - a person living in their mobile home, driving from town to town looking for seasonal work, forming a bond of kinship with other nomads on the trail.
I had no idea that modern day Nomads existed, but their life is depicted here as a melancholy one. Aside from the financial stress and alienation from family members still living a conventional life, there seems to be the pervasive discussion of death.  Sickness has to be born without financial support or maybe even familial support. The people here are either grieving for the sick or dealing with sickness and death themselves - one describes movingly the impulse to suicide.
And yet there is much to be said for the community that the Nomads form. There's mutual support, care, teaching and companionship as they meet and part and meet again. It's interesting to see that while Fern's friend (David Strathairn) does choose a sedentary life when offered the chance, the choice is not so straightforward for Fern. There's a kind of impressive endurance and nobility to a life lived away from the constraints of the small town dominated by a single employer.
The nobility and resilience is expressed in Frances McDormand's moving and vulnerable performance as Fern as well as the real life Nomads she meets.  Writer-director Chloe Zhao's decision to foreground the real community, and to straddle the line between fact and fiction is an inspired one. It affords the marginalised visibility and dignity and McDormand is the perfect entry into that world given her empathy and curiosity as a performer.
But I would also give special credit to cinematographer Joshua James Richard's beautiful depiction of the landscapes in which the Nomads live. The endless shifting-coloured sky - the feeling of fresh air and expanse. Maybe it's because I've effectively been at home for a year but I can see the appeal of a life of apparent freedom, if hardship, as so eloquently described by Nomad activist Bob Wells.

NOMADLAND is rated R and has a running time of 107 minutes. It played Telluride, Toronto, Venice and London 2020.  It was relased in the USA in February and will be released in the UK on April 30th.