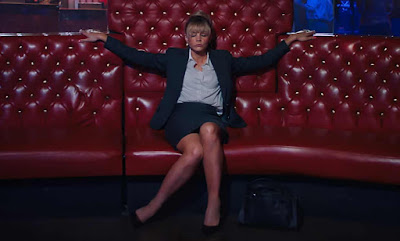 PROMISING YOUNG WOMAN is the stunning debut feature from actor-writer-director Emerald Fennell. It's the darkest of dark comedy thrillers that impresses with how it manages to handle the nastiest of subject matter, to genuinely thrill, move and entertain. To direct something that manages such swift changes in tone and mood, but never felt jarring or out of control, is a skill and feat that has beaten many more seasoned directors. I simply cannot wait to see what Fennell does next, whether reprising her role as Camilla Parker-Bowles in the THE CROWN or creating her next movie.
The film casts Carey Mulligan against type (see review for the awful THE DIG) as a very smart but deeply damaged thirty year old woman who seeks revenge on the cohort of "nice guys" who think nothing of taking drunk girls home from bars and raping them. To do so, Cassie goes to bars, pretends to be drunk, waits for the inevitable to happen and then shocks her victims with her stone cold sober retribution.  Just what the nature of that retribution is, and the reason for Cassie's rage, are withheld for the first half of the film, creating a brilliantly intriguing and disturbing tension.  This is especially acute when Cassie's revenge moves beyond men to the women who have internalised misogyny and slut-shaming and enable the crimes to go hidden and covered up and the institutions (universities, psychiatry) that further victimise women. I genuinely gasped when Cassie involved the daughter of one of her targets in her deceptions and the idea that our hero-protagonist might actually be more evil than her targets was a nasty but brilliant tease.
What really impresses is how credible all of this is - from Cassie's trauma to the arse-covering excuses given to her by all involved (not least a great performance from Alison Brie as the most smug of middle class mothers who has a come to jesus moment). I really felt for these characters - not just Cassie, but even people like Alfred Molina's guilt-ridden psychiatrist. It's really testament to Emerald Fennell's direction that the film moves you even as it uses garish almost cartoonish visuals and music. I loved the chintzy overbearing interiors of Cassie's childhood home and the pop-coloured coffee shop run by her wonderfully sympathetic boss (Laverne Cox). I also loved the visual imagery that often sees Cassie depicted with angelic wings even as she does pretty nasty things. And the fact that the script is willing to go to an ending that is fittingly dark.
Honestly, I cannot think of a single thing I didn't like about this film. Like it's heroine, it's smart and dark and thrilling, and it speaks to issues that need urgent attention. Kudos to all involved.
YOUNG WOMAN has a rating of R and a running time of 113 minutes. The film played Sundance 2020 and was released on streaming services in January 2021.
Posted by Bina007 at 10:59