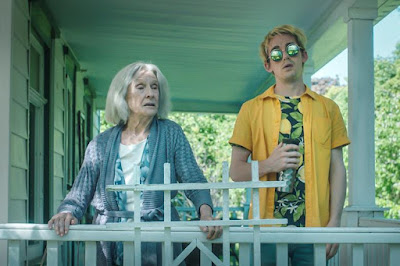 JUMP, DARLING is a beautifully shot, deeply moving, darkly funny relationship drama about the unlikely friendship between a grandmother and her grandson. The grandma is played by acting icon Cloris Leachman, who sadly passed away earlier this year. She brings all of her steely dry humour to this role as a feisty 80-something woman called Margaret who clearly needs someone to care for her, but is resisting moving into an old age home. The grandson, Russell (Thomas Duplessie), is licking his wounds after a break-up and decides to stay with his grandma while tentatively dipping his toe back into the drag performance world.
What I love about this film is its nuanced depiction of really tough topics with sensitivity but also humour.  To start off with Russell, he's clearly struggling with owning his choice to be a drag performer rather than a mainstream actor, and this ambiguity is partly forced by his boyfriend's contempt for his profession. Is he performing as a drag queen, OR is his narrative that he's just doing this while he tries to become a mainstream actor the real performance?
We chart Russell's growing confidence via a scene where he uses a powerful drag performance to effectively shame the closeted guy he is currently sleeping with.  Again, the question of who is really performing is raised: is it Russell as a drag queen, or the gay guy pretending to be straight?
And in the final, most powerful and moving scene of the film, we see Russell respond to an almost aggressive interrogation by an elder in the drag scene - and admit he does drag because it's his vocation. That acceptance is something truly beautiful and powerful, especially becuase in both their stories we see the price he is going to have to pay - not least rejection by some in mainstream society.
There's a similarly impressive and nuanced approach to the theme of suicide and suicidal ideation.  The grandmother and grandson are both dealing with memories of the grandfather committing suicide and imagine themselves in his shoes in dreamy unnerving scenes.  One senses that the grandmother both fears the memory and works it into her nightmarish vision of what it would be to move into a nursing home. For Russell it feels more like an exploration.

I'm not going to lie. Like many people I booked this film because of the legendary Cloris Leachman - and she is wonderful here.  But it's Thomas Duplessie who really impresses in a performance that is by turns vulnerable, powerful, bitchy, flamboyant, contained.  I also absolutely loved the music choices for the pivotal drag lip sync scenes and the neon-lit dance scenes shot by DP Viktor Cahoj. This really is a film that in its look, sound, style and performances punches way above its weight as a low-budget debut feature.

JUMP, DARLING has a running time of 90 minutes and is not yet rated. It played the Toronto Inside Out Festival and is currently playing BFI Flare. It does not yet have a commerical release date.