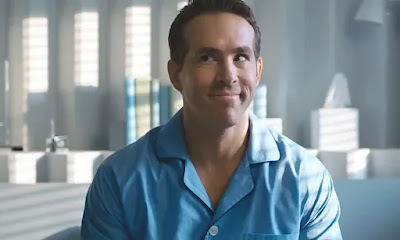 FREE GUY is an absolutely hilarious, heartwarming, fast-paced, action-adventure film that perfectly entertains the family. If I've docked it a point, it's only because the plot and concept are highly derivative of films like THE MATRIX and THE TRUMAN SHOW, albeit repackaged in a fun zany mix all of its own.

Ryan Reynolds is typically superb as a guy named Guy who lives a mediocre banal life in Free City. Except what's pretty obvious to us, but not to him, is that he's a Non Playable Character in a computer game, whose only job is to be in the background as real life kids rob banks and smoke strangers in a Grand Theft Auto style shoot-em-up game. The twist is that his AI character comes to consciousness when he meets Jodie Comer's player, because some old code had pre-programmed him to search for love. Somehow, Guy manages to steal a real player's powers and realises that a) he's in a game and b) he has agency! But unlike fucked up real world people, he decides to play as the good guy, rather than as a criminal, levelling up with breakneck speed and attracting a real world following of fans who just can't get enough of "blue shirt guy".

Meanwhile back in the real world, the true baddie turns about to be Taika Waititi's pretentious egotistical video game developer Antwon, who I read as based on the decades old British satirical show NATHAN BARLEY.  Turns out Antwon bilked Jodie Comer's character out of some of her original code, as well as her best friend Keys (Joe Keery) and now they have to team up with Guy to stop him.

The resulting film is full of fun and imagination and I loved how it not to subtly criticised the way in which real world people play video games to indulge their worst imagined vices. What does it say about us that the nicest and kindest character in the film is an AI?! I also loved the way the ending respected the bounds of the concept that had been set up and gave all the main characters an ending that actually seemed fulfilling. So kudos to all involved, not least director Shawn Levy (STANGER THINGS) and writers Matt Lieberman (SCOOB!) and Zak Penn (READY PLAYER ONE).

FREE GUY is rated PG-13 and has a running time of 115 minutes. The film played Locarno 2021 and was released on Netflix earlier this year.